The cleaning, remedial conservation and remounting of the Giant Irish Deer skeleton for for the National Museums of Northern Ireland, Belfast

Most of the conservation, cleaning and repair of this specimen was undertaken at our conservation studio in the West Midlands, England. Then we mounted the skeleton on site in the galleries of the museum in Belfast. This skeleton is probably a composite skeleton of several individuals and some smaller bones are carved in wood. Most of the limb bones were originally mounted by breaking them and rebuilding them around the metal mount work, as was traditional at the time. Portions of some of the larger bones consist of modelling material and gap fillers (plaster, Daz clay and others). This specimen had been very poorly ‘conserved’ in the 1990s with completely inappropriate techniques and materials and was finished off poorly. For instance the (non-archival) Daz clay that had been needlessly and poorly applied between and within bones (figs 1-6) was then not even painted appropriately. Now it has aged it was simply falling off. Masking tape had also been used (fig 3) and not removed, and even Sellotape was found on the specimen. The inadequacy of previous conservation work must have been clear when many of the bones simply fell apart (figs 18-21) when the specimen was dismounted prior to the redevelopment of the museum. 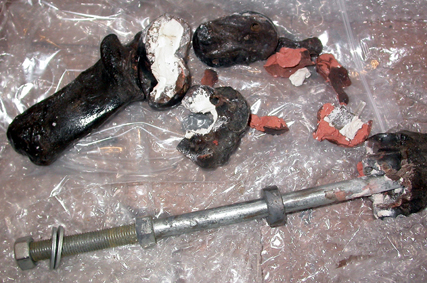 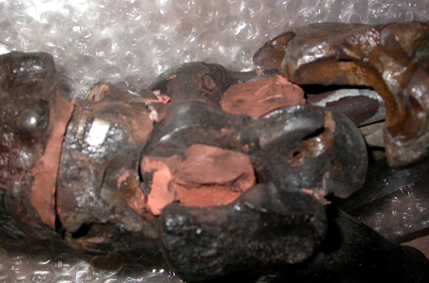 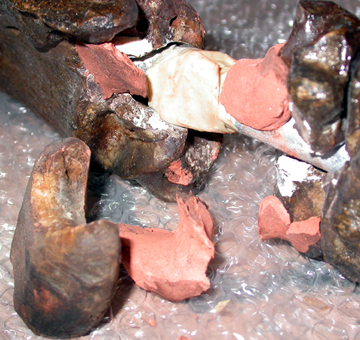 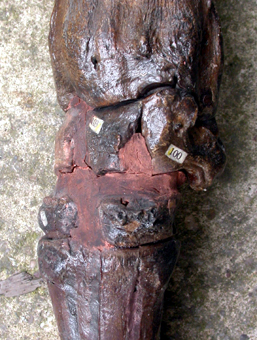 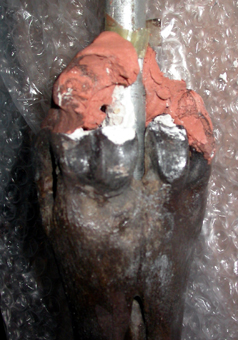 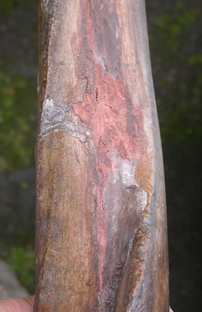 The skeleton was filthy - not just with dirt and dust but with splatters of paint, old bits of Sellotape, masking tape and modelling clay that clearly required removing (figs 7, 8 & 9). Ideally, some of the varnish should have been removed too, to make the bones less glossy but in the end there was no time for this. 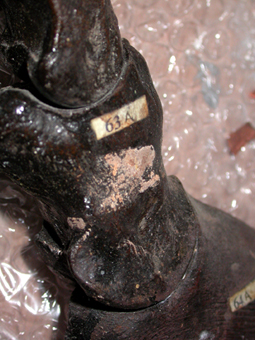 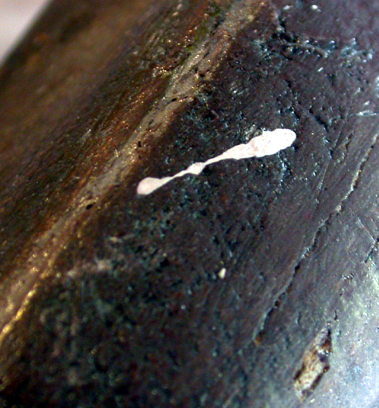 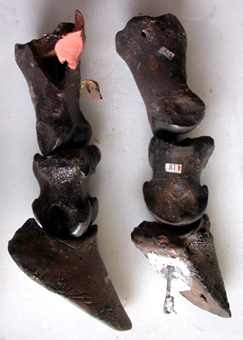 Materials used:
Adhesives: It is always best to utilize just one product on a specimen as otherwise a cocktail of different chemicals can be created in the specimen with unknown long-term stability. 'Paraloid B-72' is one of the most stable, strong, dependable and reversible thermoplastic resins available to the conservator (Down et al., 1996; Shelton and Johnson, 1995). It can be used as an adhesive, as a consolidant (dissolved in acetone for this project, but other solvents can be used) and as a gap-filler (Larkin & Makridou, 1999). Although it is one of the most easily reversed of consolidants - with the application of acetone - like most consolidants it is never fully removable from a specimen. Paraloid B-72 is particularly useful for sub-fossil material as it penetrates well and bonds very well to itself, facilitating the repair of breaks with Paraloid B-72 adhesive especially if the surfaces are consolidated first with Paraloid B-72 consolidant. Paraloid consolidant and adhesive was always used sparingly on this material. The consolidant was not applied to the whole skeleton, only to breaks that were going to be adhered together with the Paraloid adhesive. Gap-filler was applied sparingly and was made from Paraloid B72 in acetone at 25% mixed with glass beads 44 micron diameter (see Larkin & Makridou, 1999).

Foam: Plastazote foam is a chemically inert, low density, closed cell, cross-linked polyethylene foam of archival quality. This was shaped with a scalpel and applied between some bones (particularly the vertebrae). Old and dirty white foam was removed from the specimen as it was unsightly between the dark bones and was replaced with black Plastazote foam (figs 16 & 17).

Cleaning of the specimen:
Dust, dirt, fluff, old paint, old gap-fillers, modelling clay and plaster etc (figs 1-9) was removed with a mixture of gentle vacuuming and soft brushing and – where appropriate – scalpels or solvents. Also, swabbing with Synperonic-N in distilled water, as appropriate, and citric acid (5% in distilled water) to remove old plaster.

Remedial conservation work undertaken:
The old pink Daz modelling clay that had been inserted between most of the bones as ‘spacing’ (figs 1-6) was removed. It has been very poorly applied, was poorly painted out - sometimes not at all (fig 6) - and is not an archival material. It had dried out and deteriorated since it had been applied, presumably in the 1990s. Mostly, it was not needed as it was superfluous and often hid the detail of the bone. Where a space between bones required filling for support, black Plasatzote foam was inserted instead and where necessary this was glued in place with Paraloid B72.

A white material (figs 1, 14 & 15) had been applied when fixing old breaks, again presumably in the 1990s. This is either white Daz clay or an unknown gap-filling material. This was dry, fragile and ineffective, so was mostly removed. Old masking tape (fig 3) and old Sellotape was also removed as it was not archival and had deteriorated. From the surfaces of all the bones, spots of paint were removed, also smudges of modelling clay (figs 7, 8 & 9) and old plaster of Paris (especially from under the hooves). All the bones had white labels with two or three digits and often a coloured spot (figs 9, 10 & 11). These were very conspicuous as they were on the darker background of the bones and often they had been put in very prominent positions – like on the side of the neural spines of the thoracic vertebrae (fig 10), or on the midshaft of long bones at the front. As these were visually unsightly, with the permission of Curatorial staff these labels were very carefully removed, trimmed where necessary as the labels were sometimes excessively large, and glued back on to each of the bones in a less conspicuous position (figs 11 & 12). 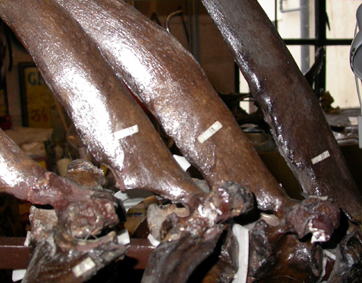 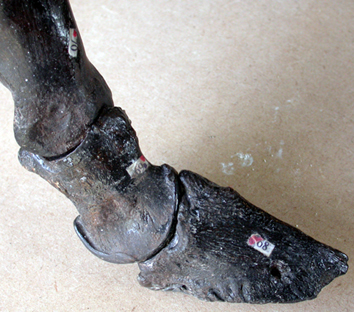 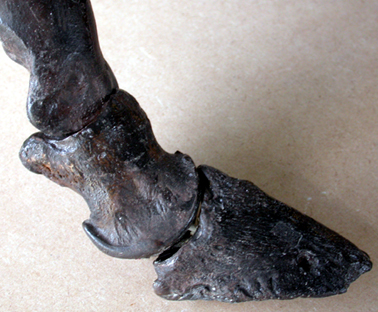 The ribs were already hung from the vertebrae with polyprolylene thread (fig 13) and attached to the sternum with metal rods (figs 14 & 15). Ideally the polyprolpylene thread would have been removed as it is unsightly. However, this would have required a huge amount of work and necessitated drilling into the transverse processes of the vertebrae and into the heads of the rids to set thin metal rods to hold the ribs in place. It was judged that the material was too fragile for this and the potential for permanent damage too great. Instead, some of the polypropylene thread was removed, or tightened and painted-out to improve aesthetics. Many of the ribs had broken away from their supporting metalwork, or the metalwork had broken away from the sternum. These were all reattached, using either glue or plaster, and plaster was used for modelling-in the broken ends of some of the ribs. 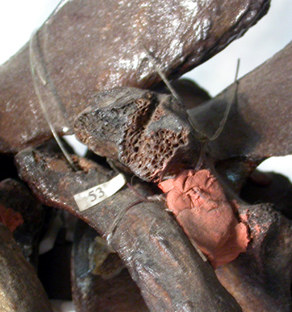 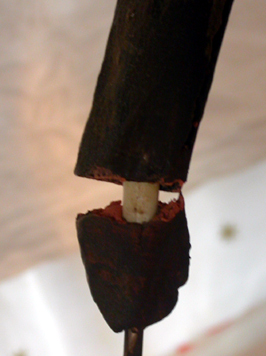 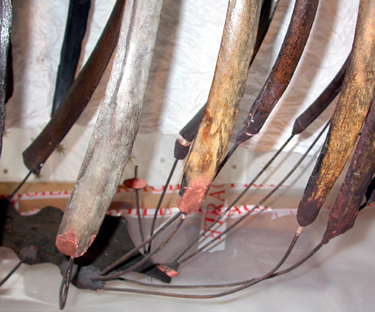 All the metalwork was painted to match the bones to make it much less conspicuous, to improve the overall visual effect. Similarly, the thin white oversized sheets of Plastazote foam that had been inserted messily between the vertebrae (fig 16) was removed and replaced with smaller, specially shaped pieces of black Plastazote foam (fig 17). 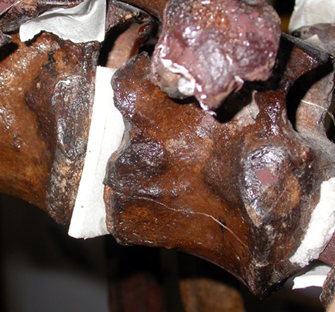 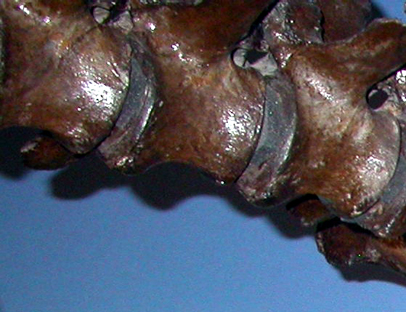 Various breaks were repaired, including: in both of the tibiae (figs 18 & 19), both of the badly broken humeri (figs 20 & 21), the broken pelvis and the re-setting of all the ribs. Plus filling-in gaps and undertaking modelling around the repairs as required, and painting-out the gap-fillers etc. 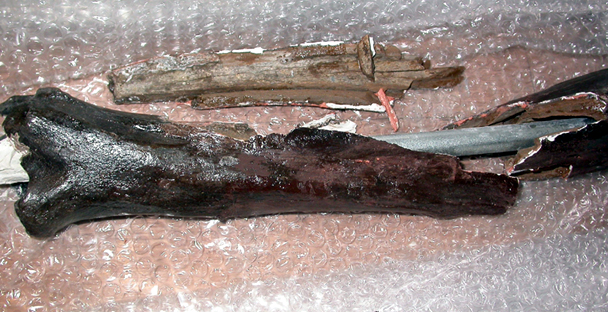 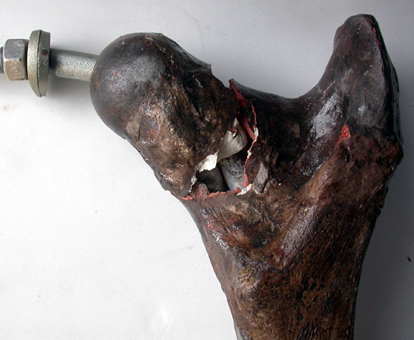 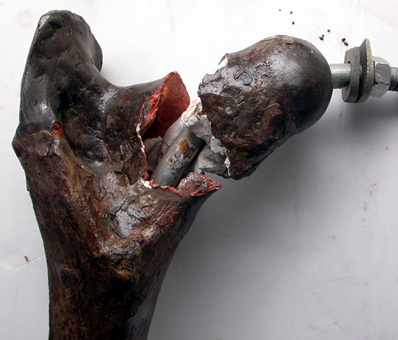 The job of remounting the specimen was made extremely difficult by three things: the bones not being labelled by those who dismounted the skeleton; very few photos of the mounted specimen being supplied, or of the dismounting process; and the base board was missing. Putting the limb bones back together was not too difficult (though it could have been easier) but it was very difficult to work out where the limbs should be positioned on the base board and holes drilled for them, to fit the metal mounts of the body when rebuilding the skeleton.

In the process of mounting the skeleton, it was decided that the addition of plaster of paris between the metal pelvic support and the pelvis bone itself would help to make the skeleton more secure, and this did make it a bit better. The plaster was painted to match the surrounding bone – as was the metal pelvic bracket and the upright metal pole it attaches to. The metalwork at the front of the skeleton was also painted a similar colour to the bones. The holes in the two vertical struts that attach to the front legs were filled in with plaster, as the white walls beyond could be seen through them, making them look like bright white buttons on the metalwork. The stance of the front legs looked a little odd, so the legs were repositioned several times to get the best appearance. However the way the metalwork fits together severely limited the options.

The skull and antlers: These were cleaned first with a vacuum cleaner and soft brush, then by gentle swabbing with Synperonic-N in water. A scalpel was used to remove splatters of old paint. The tips of several tines were damaged, and old plaster work was scraped, but this damage was mostly successfully painted-out. One tine was loose, including an area of the lower portion of the right palm which required gap-filling with paraloid B72 with glass beads (fig 22). A square hole in the temple of the forehead was filled with plaster of paris containing pigment, and painted out to match the bone.

The skull was hung from the ceiling at three points with 3mm steel cable and U-bolts. The central cable attached to the skull through an existing hole in the middle of the top of the skull – a U-bolt was clamped to the wire inside the skull. The two remaining wires looped underneath the distal third of each antler, sleeved in clear polypropylene tubing to protect the specimen from the hard wire. The tubing and wire in each case was painted the same colour as the antler where it was between the antler and visitors. The mandible is attached with polypropylene ‘fishing line’.

Where gap-filling had been necessary, whether with Paraloid B72 and glass beads or with plaster, the painted gap-fills were given a coat or two of Paraloid B72 consolidant (15% in acetone) to ensure the surface lustre was similar to the surrounding very shiny bone. 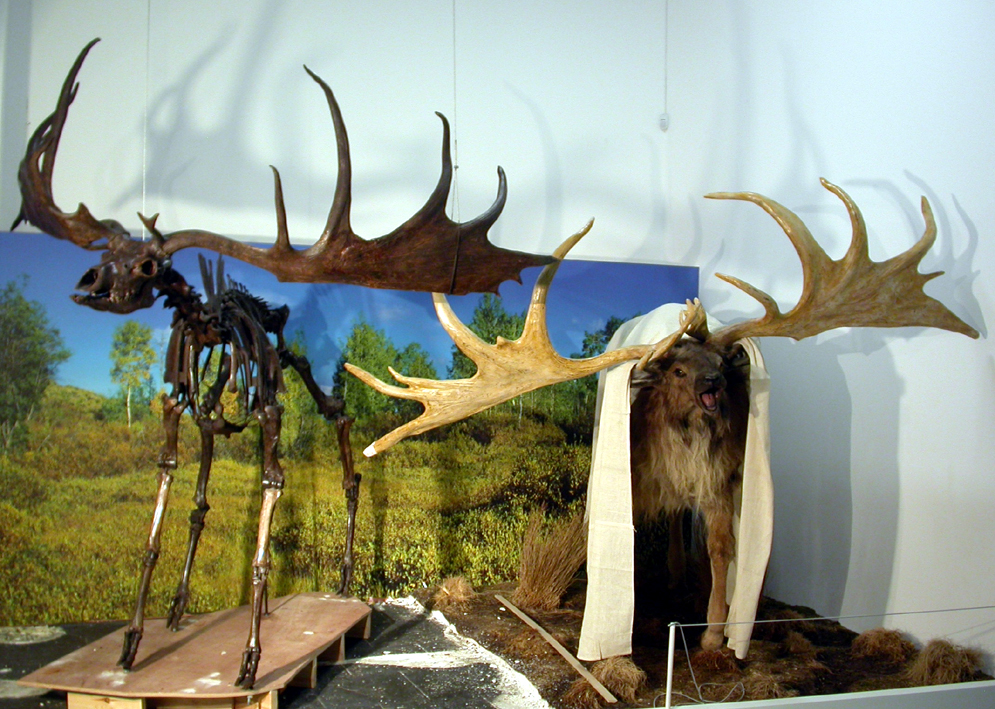 The finished specimen, on the left, before scenery installed.