Adapting a large plaster cast of a pike to enable it to be secured safely to a wall, Cambridge University. 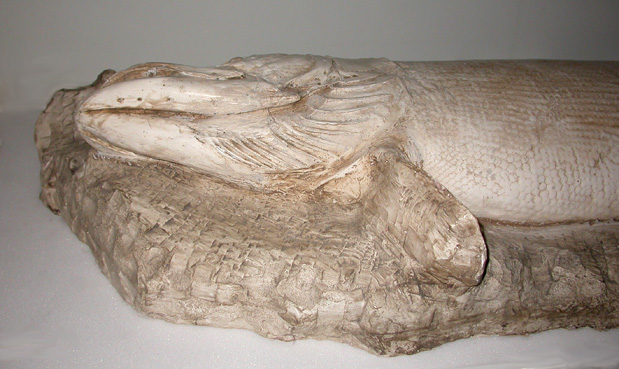 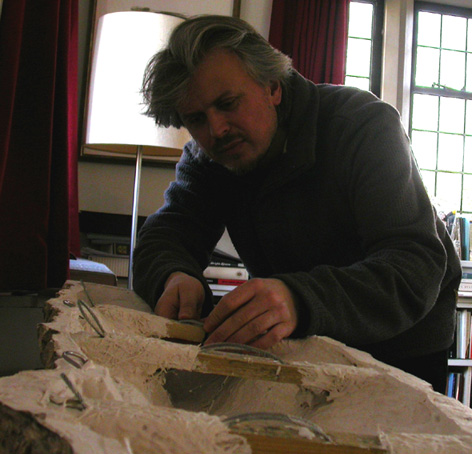 This large and fragile specimen is a plaster cast of a pike caught by the 20th century poet Ted Hughes in the 1980s. It was to be put on display on a wall in a Cambridge University College but it appeared fragile as well as heavy (it is about 15 to 20 Kg, and about 25 or 30 years old). It was recommended that however it was secured to a wall, ideally it would rest on a shelf well secured to the wall directly below it, and even be displayed at an angle off the vertical to reduce the likelihood of accidents. However, a shelf was considered aesthetically unacceptable so a solution was required that would enable the specimen to be well secured to the wall without a shelf taking some weight.

To this end, the following method was devised: the specimen would hang from three loops of strong zinc coated twisted wire rope of 3mm diameter. These could not be simply attached to the rear of the specimen directly as the rear of the specimen was hollow and the loops needed to end up parallel to the wall, near the top of the cast or the specimen would droop away from the wall at an angle. Therefore the wires were threaded through wooden batons that kept the top loops of the wire more parallel to the wall (see diagram) and enabled the load to be spread. The ends of the wire rope were secured with gripping nuts. These batons were secured to the hollow in the rear of the specimen with Jesmonite acrylic (AC100) resin with woven glass fibre cloth. This resin is durable as it is used in the architectural industry. It also has few health and safety issues associated with it unlike most other resins. It bonds well to plaster. Even so, a large area of the rear side of the specimen was covered with the Jesmonite resin and glass fibre cloth to ensure a large contact area between the old plaster and the new resin, to ensure a good grip between the two and to spread the load. Whilst Jesmonite is not a conservation-grade material, it is being used on the rear of the specimen not the front, and is likely to outlive the plaster of the specimen itself.

Once the resin had been given adequate time to set properly, the specimen was successfully secured to the wall by hanging the three wire loops on to screws secured into the wall with rawplugs. 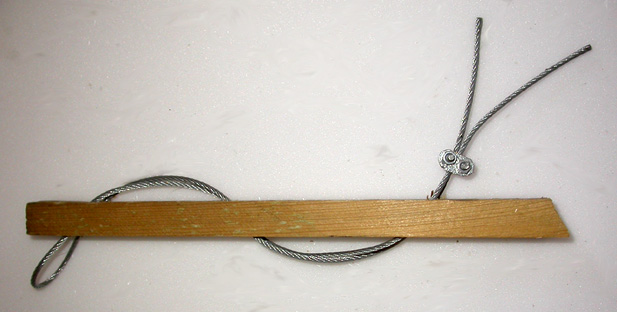 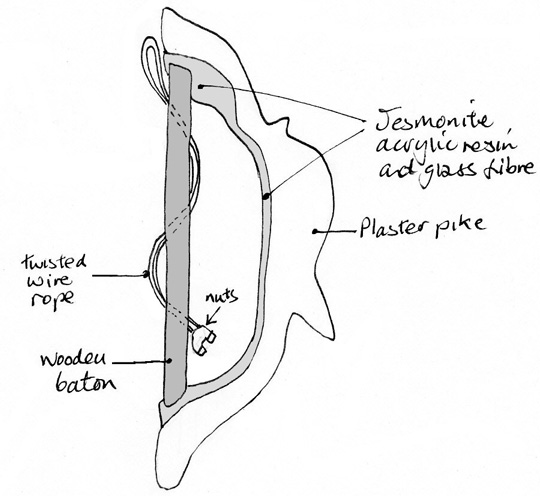 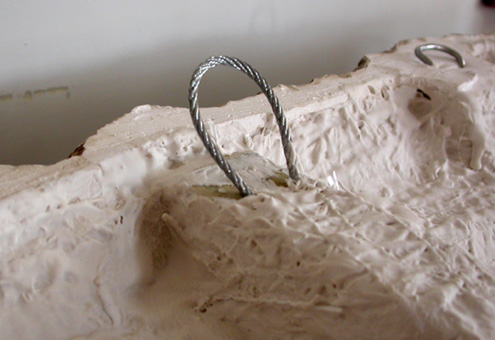 Left: the 3mm wire rope, doubled over and threaded through a baton (it was pulled more taught before use), secured with nuts. Middle: cross-section of the plaster pike and the materials used to hang it from the wall. Right: detail of one of the three wire loops from which the plaster cast was hung.

The three batons with wire ropes, secured in place to the rear of the specimen by Jesmonite resin and glass fibre. 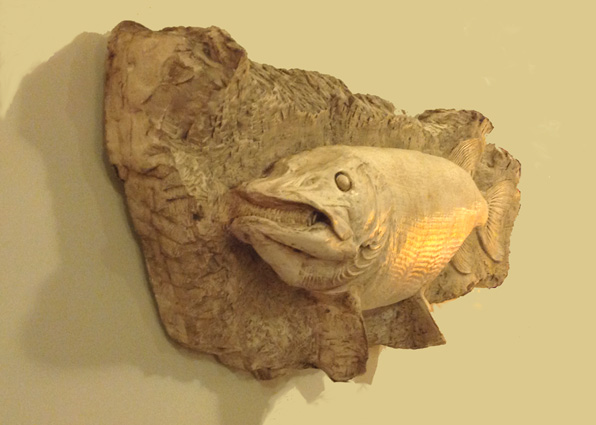 The specimen secured safely to the wall.