This proximal portion of woolly mammoth tusk (almost a metre long) was found in waterlogged gravels in Staffordshire in 1992. Because it was wet and was slowly splitting at the time it was found, cable ties were used to hold the specimen together whilst the consolidant Primal (at 20 percent in water) was applied to the tusk to strengthen it and keep it together by the conservator working on it at the time. Whilst this treatment worked well, over the years the surface of the tusk had begun to flake off in tiny pieces and the small amounts of sediment had begun to effloresce (this was possibly pyrite decay, as it had suffered from this soon after excavation). Also, the black cable ties looked a bit of an unnecessary mess. In 2015 Nigel Larkin was asked to undertake further conservation work to improve the condition of the tusk. 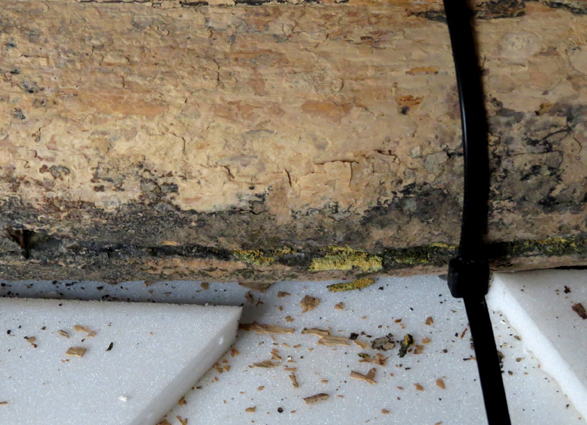 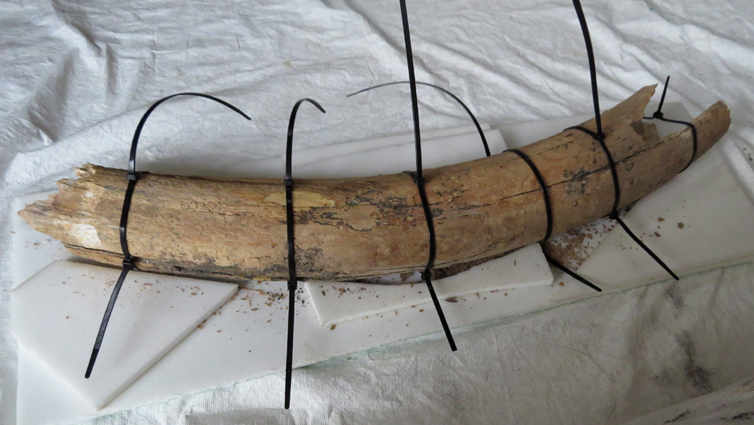 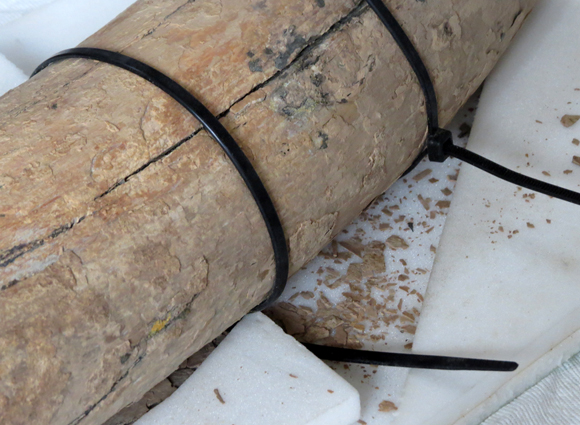 The specimen was cleaned very gently with small soft artists brushes to remove the efflorescing sediment and to remove the small loose bits of tusk that had already detached (these small bits were like powder, they could not be re-attached). The surface of the specimen was then consolidated with a single coat of Paraloid B72 consolidant (in acetone). Previously, black cable ties had been used although the tusk was a beige colour so these were replaced with white cable ties. Also, whilst the black cable ties seem to have been applied randomly and their excess had not been trimmed off, the new white cable ties were lined up so the connecting bits were all ‘behind’ the specimen, and the excess portions were trimmed to leave a much nicer specimen aesthetically (also, fewer cable ties were used).

Previously, although the specimen had lain on inert Plastzote foam to provide some gentle support, the foam and specimen was then just laid on a shelf meaning that if the specimen was moved it was handled unnecessarily and this could cause damage. Therefore a permanent wooden base was made for it, lined with Plastazote foam on top and with wooden batons underneath so the wooden support with its tusk could be picked up more easily and without stressing the tusk.

For more details about what we can do for you, or for a quote, please contact:
enquiries@natural-history-conservation.com
We are members of ICON, the Institute of Conservation