Moulding and casting the bones of Leedsichthys - the biggest bony fish ever.

Leedsichthys problematicus is a huge species of Jurassic fish, dating to about 160 million years ago that grew to about 15 metres long. This specimen, shown on ‘The Big Monster Dig’ on Channel4 (8/9/2003) and ‘Sea Monsters: A Walking With Dinosaurs Trilogy (23/11/2003) is from a pit of Oxford Clay near Peterborough, and is now residing in Leicester Museum. 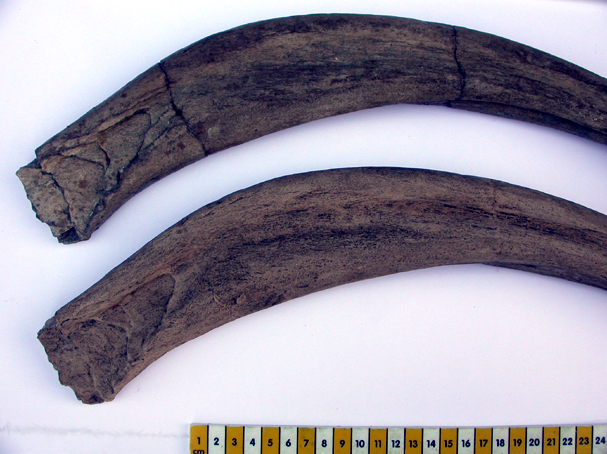 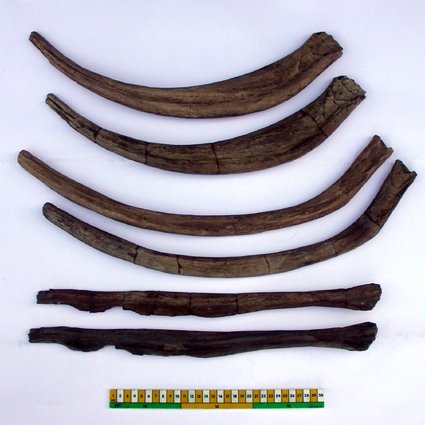 For display purposes, seventeen bones (thought to be fin rays) of Leedsichthys needed to be replicated (see images of bones and their casts to the left and right). However, as well as being long, thin and made up of sections glued together (some repaired breaks had failed), the bones were porous and fragile. Therefore, to make replicas without damaging the vulnerable specimens and to reduce the potential for chemical adulteration, each bone went through several processes during the project:

- Each piece was inspected, and cleaned if necessary.
- Breaks had to be repaired with a conservation grade adhesive after the application of consolidant as and when appropriate.
- The bones had two applications of temporary consolidant applied to their surfaces to protect them from moulding materials.
- Any holes, cracks, gaps or underhangs were filled with water-soluble putty to stop the mould rubber from penetrating the bones during the moulding process.
- The bones were painstakingly ‘laid-up’ in low-oil Plasticine in a suitable orientation to make a two-part mould ready for the first application of rubber (at this point the moulds were permanently labelled).
- Several coats of good quality ‘museum-grade’ silicone wacker rubber were applied, with the latter layers utilising a thixotropic additive to firm-up the rubber.
- This was followed by a couple of layers of acrylic resin and fibre glass cloth to provide the rigid section of the mould.
- Then the bone was turned over in this rubber, resin and plasticine jacket and the plasticine removed.
- The moulding process was repeated on the second side.
- When all the materials had set, the bones were carefully de-moulded and all plasticine and water-soluble putty was removed.
- The consolidant was removed from the surfaces of the bones as much as possible with acetone, being careful not to dissolve the glues holding the breaks together.
- An acrylic resin - coloured with a suitable pigment - was used to make the casts from the moulds.
- The casts were painted and numbered.
- The bones, moulds and casts were wrapped, numbered and packaged ready for the return journey. A conservation report was written detailing the processes involved in the project. 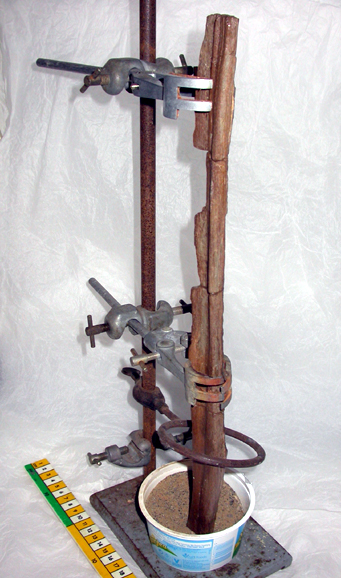 Left: a bone requiring fixing. Middle: bone being glued back together. Right: bones laid-up reading for the moulding process.

There were so many processes involved and the seventeen bones were so fragile that the whole project took quite a long time – about 40 working days over two months or so. Any moulding and casting project is very labour-intensive, even with simple, strong, non-porous bones and the moulding part takes up about 80% of the time or more. Making the casts is relatively straightforward and subsequent copies can be made quite rapidly and relatively cheaply. Making moulds for just one set of replicas always seems very expensive.

The materials used to undertake the work included:
- A reversible and stable conservation adhesive, also used at 15% in acetone as a consolidant prior to re-gluing old breaks, and to protect the surfaces of the bones from the rubber used for the moulds. - Acetone was used to dissolve the adhesive on the surfaces of the bones after the moulding process. - Reversible and removable water soluble putty (polyethylene glycol, glycerine and precipitated chalk) was used for temporary gap-filling, plugging holes and blocking-off underhangs so that the rubber did not penetrate the bones. - A low-oil plasticine was used for laying-up the bones to make the two-part moulds. - An expensive silicone rubber was used for making the flexible parts of the moulds. - Acrylic resin was used for making the casts and the rigid jackets for the rubber moulds. - The casts were painted with standard artists’ acrylic paints. 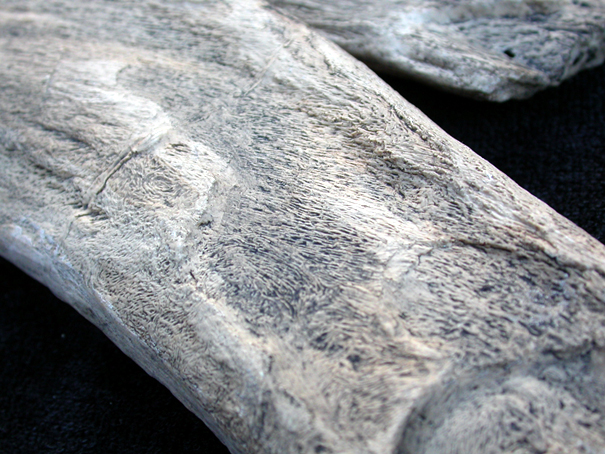 Left: Bone after moulding process, before being cleaned. Water soluble putty is still evident in the cracks. . Right: Close-up of a cast, showing the level of detail picked-up by the fine rubber mould of the bone. 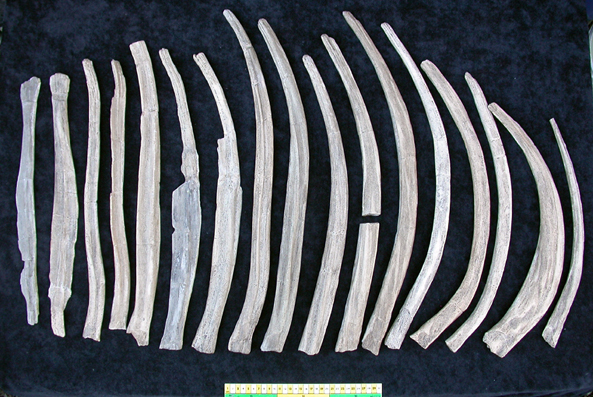 The following text about this species is lifted from Jeff Liston’s website:
http://big-dead-fish.com/index.php
and you can read more about it there, and look at photos.

Leedsichthys problematicus is the largest ‘bony‘ fish (i.e. not cartilaginous, like a shark) known to have ever inhabited Earth's oceans. It lived during the Middle Jurassic, at a time that gigantic dinosaurs inhabited the land - so perhaps it is not surprising that there were also giants in the sea. In contrast to the marine reptiles and sharks more popularly known from the seas at this time, this fish appears to have been a planktivorous filter-feeding animal, growing to great sizes. Some estimates, based on isolated skeletal components, have suggested that this fish might have grown well over 20 metres in length, but conservative figures of over 15 metres seem much safer.

One of the reasons for the uncertainty surrounding the size - and, indeed, the appearance - of this fish, is that its bones are exceptionally thin, and are crushed by the weight of clay over millions of years. This means that some specimens are in over a thousand pieces before attempts are made to try to glue them together into whole bones. This means that the bones are hard to identify. Another problem is that many of the fish from this family (Pachycormidae) had only limited calcification of their skeleton - so many parts (for example, the backbone) simply do not preserve in the Jurassic Oxford Clay. A fish without a backbone is a series of small clusters of bones - from which it is very hard to tell how large it might have been in life. Only limited partial skeletons have ever been collected of this animal.

Despite the paucity of its remains, Leedsichthys problematicus seems to be the largest bony fish ever to have evolved- although it only needs to be over 11 metres in length (the size of the ‘King of Herrings’, the living contender) to claim that title. This is different from the largest fish of ANY kind ever, as there are a few living cartilaginous fishes (eg whale shark, basking shark) and extinct (Megalodon) that are significantly larger than that figure. Estimates for extinct cartilaginous fishes Edestus and Helicoprion have occasionally gone over the 15 metre mark, but these seem to be utterly unsupportable figures. Similarly, Leedsichthys was well short of the length of the largest aquatic vertebrate known - the blue whale, which is a mammal that can grow up to 25 metres in size.

Leedsichthys was a remarkable animal. The fact that it grew to around 15 metres rather than "35 metres…the length of 3 London Buses" (The Sun, 18/9/2003) does not diminish that truth. No bony fish appears to ever have come even remotely close to its success (if large size is any measure of success) - the closest example today - the King of Herrings - only grows to a length of 11 metres through eschewing classical fish body forms (e.g. tuna-shaped), instead approximating the form of a pencil with fins.