During a programme of systematically upgrading storage media for the geology and palaeontology collection of the Yorkshire Museum, staff put aside various problematic specimens for specialist conservation advice. During a two-day visit eleven fossils suffering from pyrite decay / pyrite oxidation were cleaned, three palaeobotanical specimens suffering from a small amount of mould were cleaned and one specimen found to be suffering from both pyrite oxidation and efflorescence of salts was such a great example of a museum specimen undergoing change that it was kept as it was, to be an educational aid. As well as providing conservation reports detailing the remedial work undertaken on each specimen (see summaries of examples below), advice was given on environmental targets to prevent pyrite oxidation including making low-RH microclimates. Also, advice was given on recognising pyrite oxidation and protocols were devised for staff and volunteers to follow upon discovering specimens suffering from pyrite decay, including how to undertake basic cleaning. The following specimens were cleaned whilst using appropriate equipment including goggles, dustmasks, disposable gloves and a conservation vacuum cleaner.

Cluster of molluscs completely preserved in pyrite.
This specimen was wrapped in tissue that had been ‘burnt’ badly by the acidity of the decay by-products that were thickly encrusting this specimen. The whole specimen was affected. All areas were cleaned with scalpels, dental picks, wooden points and brushes. The specimen was vacuumed and swabbed with acetone. After cleaning the whole specimen was treated with a couple of applications of Paraloid B72 in acetone at 5%.


Toxoceratoides/Ancyloceras from Speeton, Yorkshire.
Pyrite decay by-products were present over the whole surface of the specimen. They were removed with brushes and vacuum cleaner. Once clean, the specimen was given two applications of Paraloid B72 in Acetone at 5%. Old sellotape was removed from the packaging.

Left: before cleaning. Right: after cleaning.

Phylloceras heterophyllum
The pyrite decay was only active within the matrix encrusting a portion of this large ammonite in the centre. The by-products had already been partially removed. Further removal was undertaken with scalpels, dental picks, wooden points and vacuum cleaner. After cleaning the area was treated with a couple of applications of Paraloid B72 in acetone at 5%.


Left: before cleaning and consolidation. Right: after.

Ammonite S.12 II LB.I.E/F(?) PAL 85.7 This robust and three-dimensionally preserved partial ammonite in two pieces was not only experiencing pyrite decay over its whole surface (as evidenced by the yellow and grey powder build-up) including on the cross-sections at either end, but it also appears to be suffering from efflorescence as well (as evidenced by patches of white, fine, needle-thin crystals growing on top of the pyritic crust). Whether or not the acidity of the pyrite decay by –product started an outbreak of Bynes decay is difficult to say. This specimen was not remedially treated as it was decided that it should be kept as an example specimen for demonstrating what can happen to geological specimens in storage. 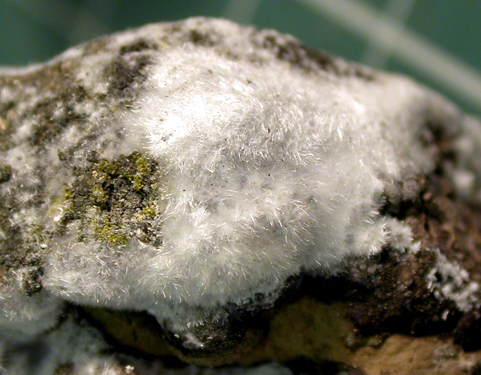 Fine white needles of efflorescence growing on the ammonite. It is also suffering from pyrite decay as evidenced by the grey and yellow powdery substance also seen on the surface.

Hoplites heteroptychus Pavlow from the Speeton Clay
This specimen has suffered from pyrite decay for a long time. In the 1970s it was noted that it had ‘decomposed almost completely’. It had been consolidated in the past, but this had not penetrated far so had only preserved a crust. The specimen under this crust now merely consisted of the powdery by-products of pyrite decay. Some excess powder was removed and the remainder was consolidated with several applications of Paraloid B72 in acetone at 5%. The specimen is extremely fragile and should not be handled.

Future storage of these specimens
All the specimens cleaned will need to be kept in much drier storage conditions or they will continue to deteriorate further. A polypropylene container with a tight fitting lid (such as a Stewart box) containing either dry silica gel or pre-conditioned Artsorb (plus an indicator strip) could be used to create a suitable microclimate for several specimens at a time. Alternatively a dessicator chamber could be made to the desired size using Perspex and containing an appropriate amount of silica gel or Artsorb.

Specimens treated for mould
Three palaeobotanical specimens exhibited very small (but numerous) patches of white mould on their upper surfaces. These mould patches were swabbed very gently with cotton buds dipped briefly in ethanol. This removed the mould. Small light patches remain where the mould was but this may be because the mould was living off an organic consolidant used on the specimens in the past. The consolidant is no longer there where the mould had effectively removed it by growing on it.


Left: Sphenobaiera pecten before conservation with the white mould in patches. Right: after conservation.