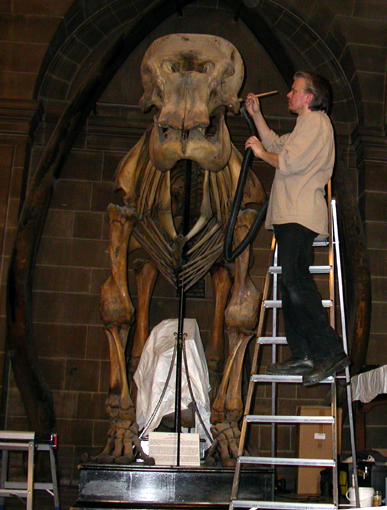 Both skeletons and the additional two skulls were covered in a thick layer of dust (see image on the right), especially on any surface presenting even a vaguely horizontal plane on which dust could settle. At some point in the past an attempt had been made to clean the elephant specimens with a traditional yellow cloth duster, with the result that may cracks, holes, crevices and bumps had yellow fibres clinging to them still, adding to the ‘fuzzines’ of the bones. As well as being unsightly, the dust was also obscuring some of the finer detail of the specimens. All the bones and metalwork were given a thorough clean with soft brushes, making sure as much dust as possible was caught by the nozzle of a vacuum cleaner that was always held no more than an inch or so away from the brush. The highest bones were worked on first, moving around the body, moving lower as each section was cleaned. The nozzle was not used against the bones, only the soft hairs of the brushes touched the bones. 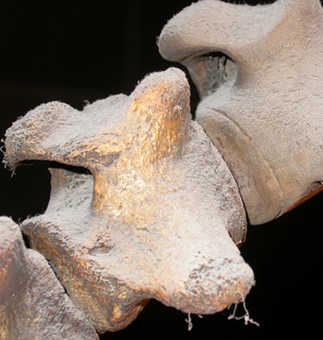 Where necessary, further cleaning was undertaken by applying a conservation detergent (greatly diluted in warm water) with a small brush. This was applied in small areas and wiped away quickly with a strong lint-free tissue, making sure no wet tissue was left on the bone. Areas that needed cleaning with this method included the feet of both the elephant skeletons, all four skulls and some of the lower limb bones. Not only do these areas accumulate a great quantity of dirt and dust but it shows up more than elsewhere (there are lots of horizontal or near-horizontal surfaces), and they are the parts of the skeletons that are looked at the most. Much of the skeleton in each case did not need cleaning with detergent this way, and the whole process would have taken much longer if they did. The wooden bases were extremely dirty around the feet, in between the digits. These areas were scrubbed clean in the same way as the bones and dried immediately. They still look a bit shabby as it appears the surrounding wood of the bases have been repainted at some point in the past but not the areas between the digits. Repairs were undertaken to the specimens as necessary, detailed below.

Skeleton 1, to the south of the hall:
Six belly ribs were loose and had to be reattached (all glues and consolidants used were reversible conservation adhesives). They were either glued back into place or wired back into position, as necessary (the wire was painted-out as it was extremely shiny compared to the older wire of the original mount). Two belly ribs were completely detached and had to be put back on. All the belly ribs are made from carved wood, as are some of the tail vertebrae. The last dozen-or-so distalmost vertebrae of the tail were detached, still adhering to the metal wire on which they were originally mounted. They were reattached, with the wire glued in to place (two of the vertebrae were found under the rear feet). The distalmost section of the pelvic symphysis had been damaged in the past and a broken piece was found under one of the rear feet. This was glued back on after appropriate consolidation. Several toes bones were displaced and were realigned. Two digits – one each on the rear feet - were completely detached and had to be rejoined. Five toenails were partly or wholly loose. These were nailed back into place (using the original nails and holes) or tied with polypropylene thread. Some putty or gum was removed from the distal end of the left alveolus with a scalpel. 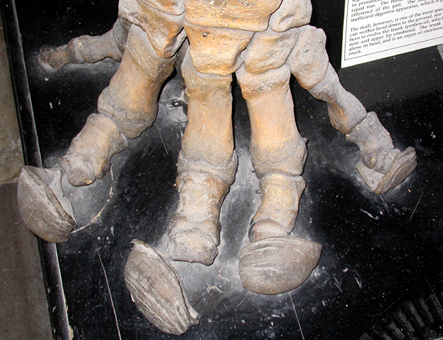 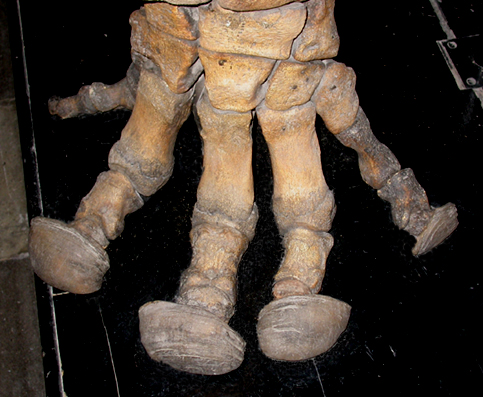 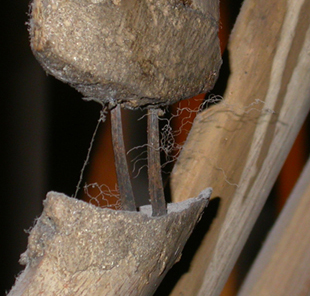 Front right foot before cleaning and realigning (left) and after (middle). Rib that had slipped and required resetting after cleaning (right).

Whilst cleaning the specimen it was noted that the neural spines of three vertebrae showed signs of pathology – two were fused together. The centra of two adjoining vertebrae were also fused together. 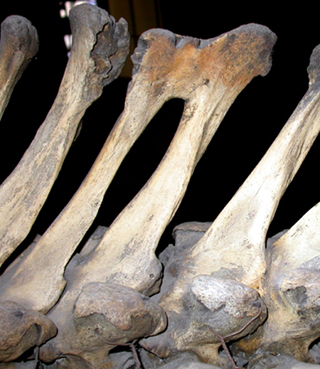 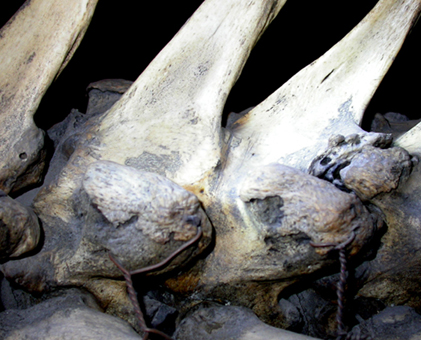 Skeleton 2, to the north of the hall:
Hardly any repairs needed to be undertaken on this skeleton. However, the proximal end of the left humerus was in pieces and very loose. This was due to the way the metalwork of the mount had been inserted through a hole drilled through the fragile and weak epiphysis and the broken pieces replaced by adhering them together with putty over the metalwork. This putty had dried and failed. The area was cleaned and the pieces consolidated and adhered back together. Two digits of the feet had fallen off and had to be re-attached. Both the front right and front left feet are missing the terminal phalanges on one digit and some foot bones are carved out of wood. 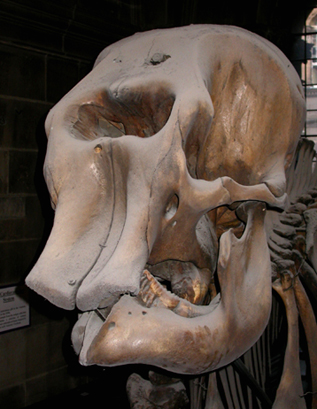 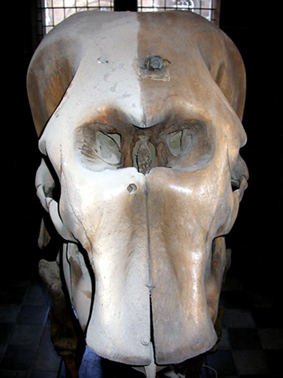 The skull before cleaning (left) and when the right hand side had been cleaned (right).

The joint between the left humerus and the radius/ulna seems to display some pathology. The articulation area is very, very porous and weak with some bone overgrowth compared to the same joint on the right. 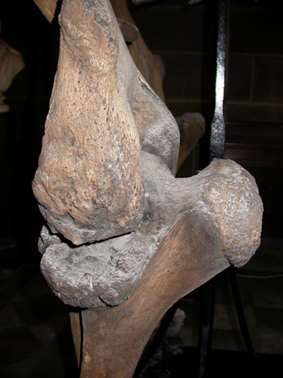 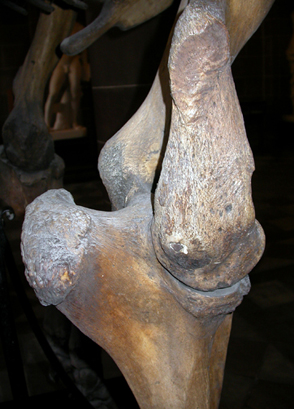 The sectioned elephant skull:
This quite delicate and intricate specimen was very dirty. It has survived well being on open display for many years but it would be safer and less prone to getting dirty and dusty if it was in a display cabinet. Dust will accumulate again very easily in the open sectioned side of the skull and this will look very unsightly again soon. 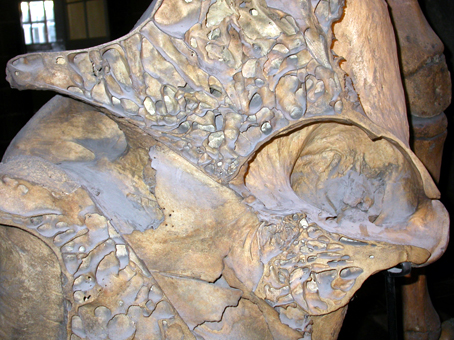 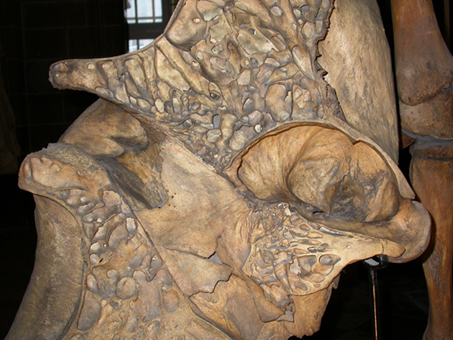 The complete elephant skull:
This was cleaned in the same way as the other specimens, and required no repairs. 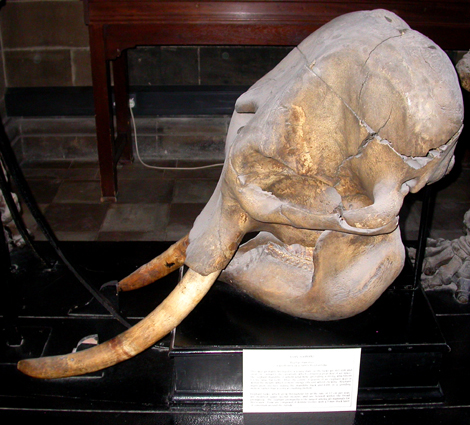 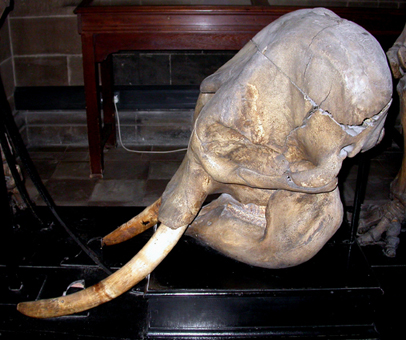 The complete skull before cleaning (left) and after (right). 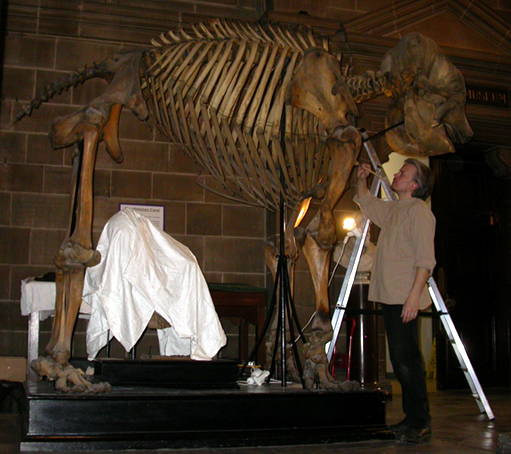