Condition of the specimen
This specimen appeared fairly complete but was covered in dirt, dust, ceiling plaster, cobwebs and some bird faeces. The skull was complete and fairly sound though many of the teeth were broken or missing, as is normal for specimens not hung permanently on a wall – the teeth get damaged as the specimen is moved around as the teeth frequently take the full weight of the specimen as it is placed on the floor or other surfaces. This specimen had been stored for some time in stables, with the skull lying on hard cobbles.
The right antlers (the specimen’s right side, not the viewer’s right) were relatively complete. The first lower tine had some damage; the second lower tine had been replaced with a metal rod covered with cork; the third and fourth tines were missing and look like they had never been replaced; the fifth lower tine was almost complete with just the tip damaged; the sixth and seventh tines were complete; the eighth tine had been replaced with a metal rod and cork; and the upper tine was complete. The main beam had been cut through just distal of the first tine and presumably a large wooden dowel was inserted within, with nails used to hold the antler in place The original antlers on the left seemed to have not been preserved at all. The main beam had been cut through about nine inches distal to the first lower tine and presumably a wooden dowel or a metal bar has been inserted into the beam. The whole of this antler seems to be made of carved cork upon a metal frame, and the cork has deteriorated badly in places, notably the tips of all the tines. The first, sixth, seventh and eighth and top (ninth) tines requiring remodelling and repair. There were many holes, breaks and scuffed areas on this side, and pieces of cork simply hanging-off. 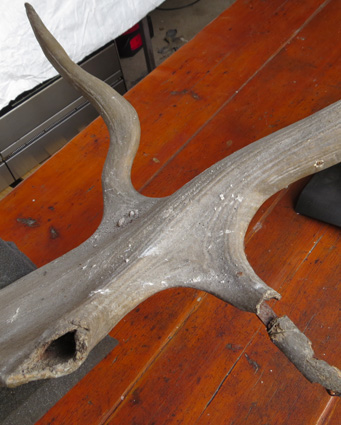 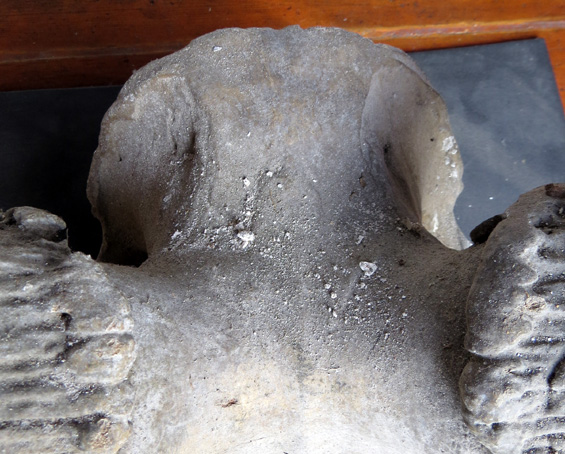 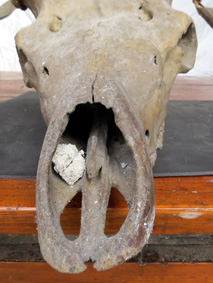 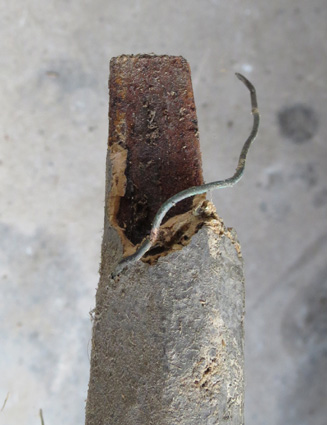 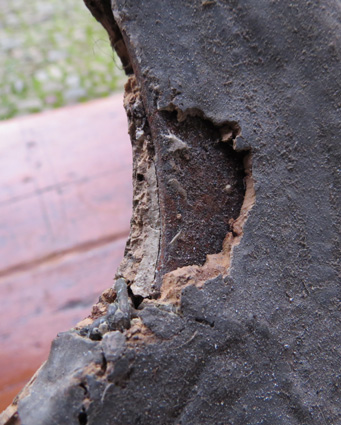 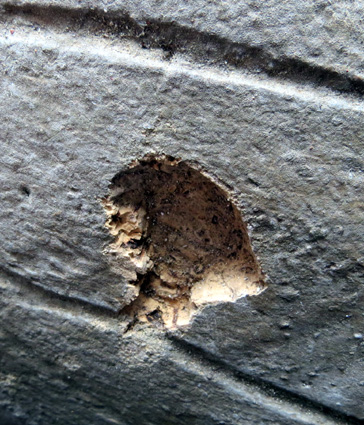 Cleaning
The specimen was cleaned initially using a soft paint brush and vacuum cleaner to remove the worst of the dust. Then, Synperonic-A7 (a mild museum detergent) in water (at about 2%) was used to swab small areas of the specimen at a time. These small areas were then swabbed again a couple of times with just plain water to remove the detergent, and dried with paper towel. Once the specimen had been cleaned of the dust and dirt, it became obvious that at some point in the past nearby walls or ceilings had been painted and a fine spray of white paint had landed on the specimen. This was difficult to remove, but the worst was lifted off with a scalpel.

Remedial conservation
PVA glue was applied to broken areas of the cork. A museum consolidant (a thin, reversible conservation glue, Paraloid B72 at 5% in acetone) was applied to the real antler material and to the skull to give protection, to re-instate the original colour and to provide a good surface for repairs and modelling-in to attach to.
Depending on the need, where the ends of the tines had been broken off, either thin wooden dowels or stiff wires were inserted into the ends of the broken tines to provide some support for modelling. The two tines that were completely missing on the right antler required aluminium mesh models to be constructed, joined to the antler at the base with Jesmonite acrylic resin.
The tines were repaired and/or modelled-in with Jesmonite acrylic resin mixed with pigment and hollow plastic spheres (these make the resin softer and more easily shaped once dry). This is better than plaster of paris as it is tougher and more durable. The resin repairs and models were carved with knives and chisels and sanded-down where necessary, then painted with artists acrylic paints. The tines that were completely modelled are the first tine of the left antler, and the third and fourth tine of the right antler. The various holes and gaps in the cork were filled with Jesmonite resin in a similar fashion. 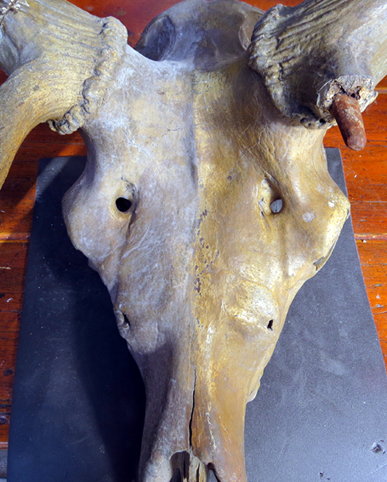 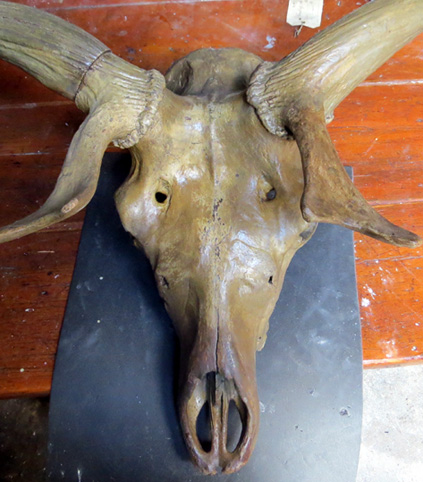 Above: Left, the skull with the right half cleaned but note the absence of the first tine on the right. Right, the skull completely clean and the missing first tine modelled-in 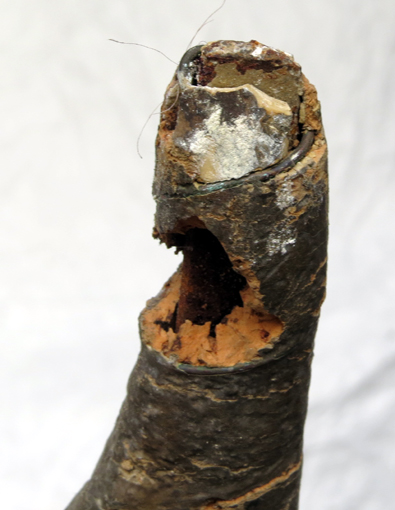 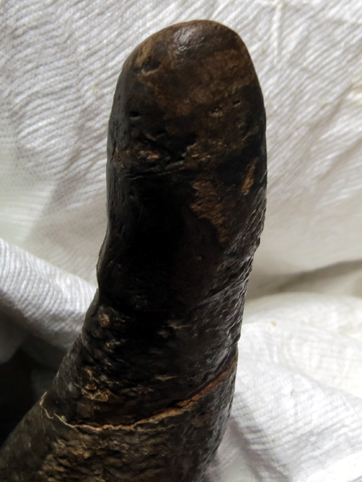 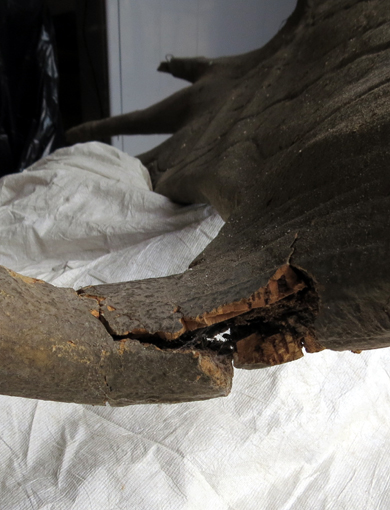 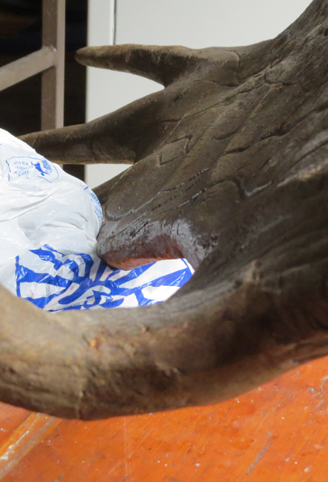 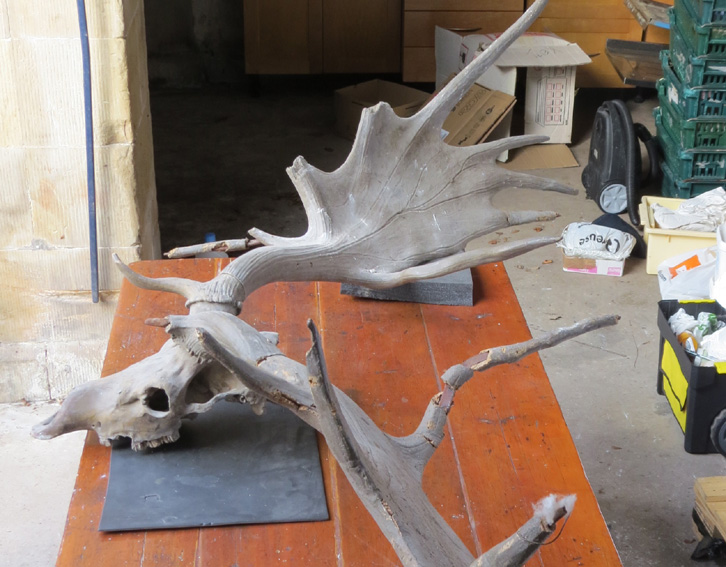 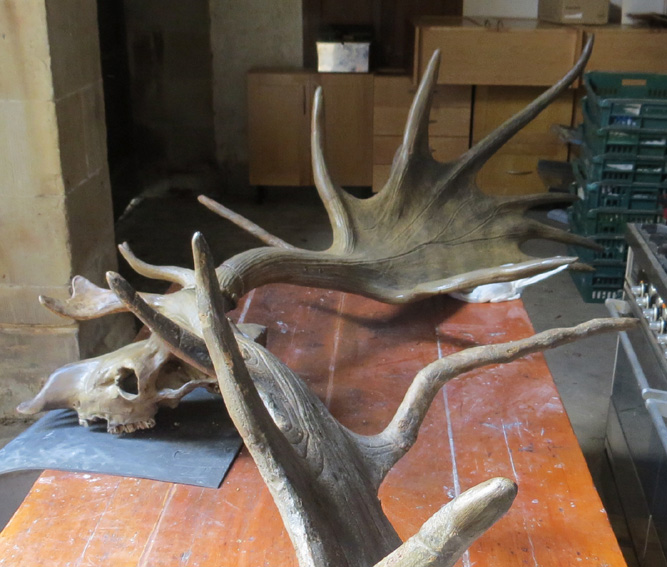 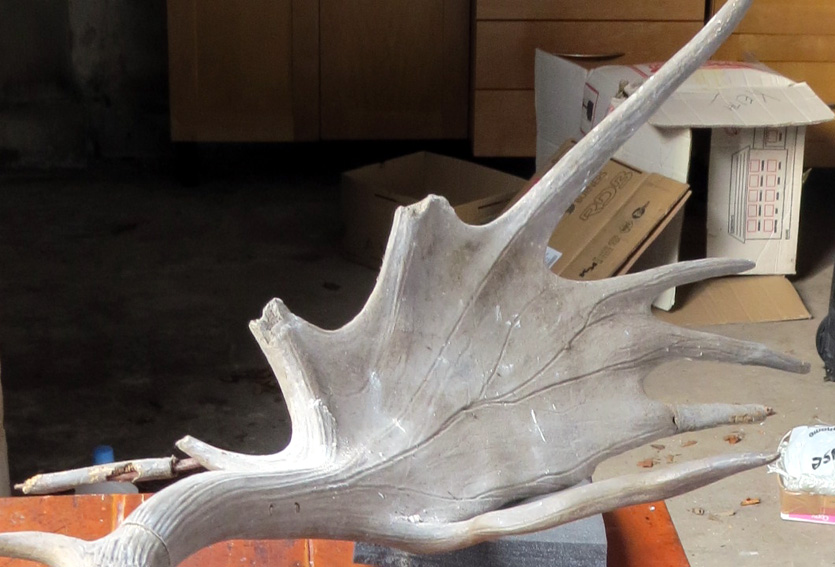 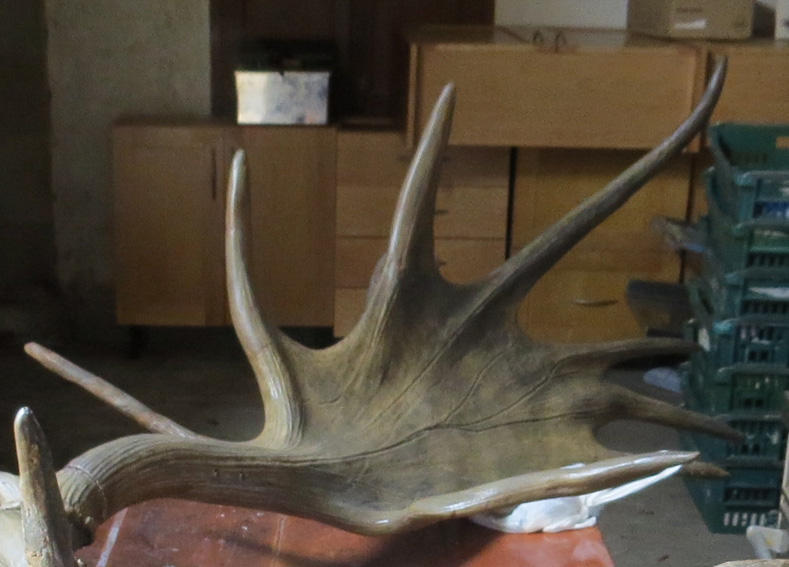 A separate, unassociated but complete giant deer skeleton was also assessed and advice given about cleaning, conserving and mounting the material (below, left). Also, a variety of Red Deer antlers were cleaned as well (below, right: where the cleaned antlers are on the left, and the dirty antlers are on the right). 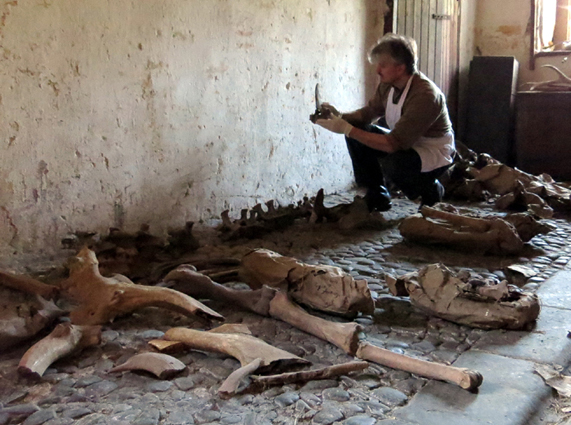 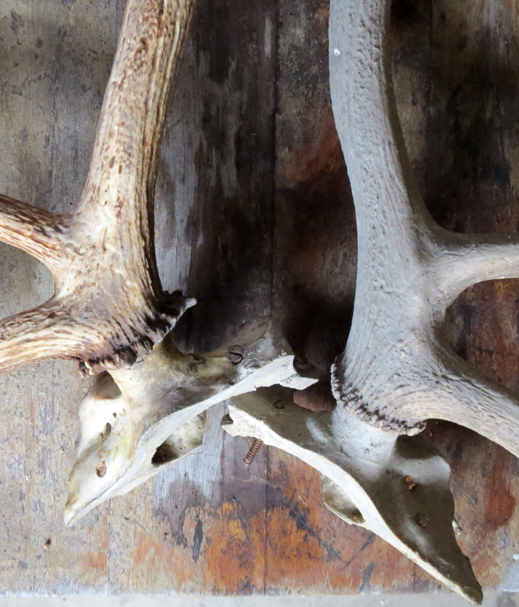 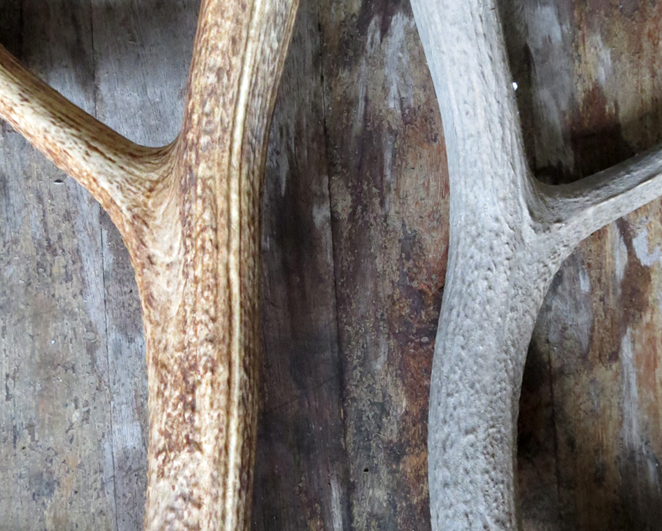 For more details about what we can do for you, or for a quote, please contact:
enquiries@natural-history-conservation.com
We are members of ICON, the Institute of Conservation