The cleaning, conservation and remounting of the Asian Water Buffalo (Bubalus bubalis) skull and horns at the Grant Museum of Zoology, UCL. Nigel Larkin, 2015.

This work to undertake the cleaning, conservation and remounting of the Asian Water Buffalo at the Grant Museum of Zoology was part of the ĹBone Idols project to clean, conserve and where necessary remount 29 of the museumĺs most important specimens. 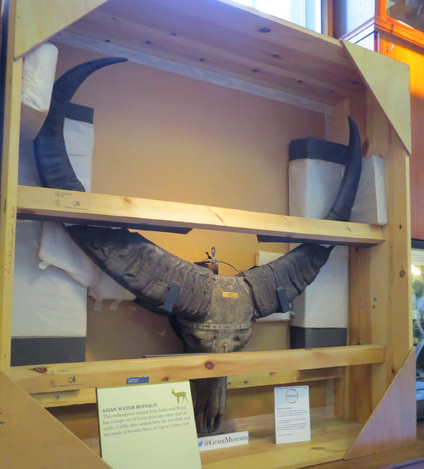 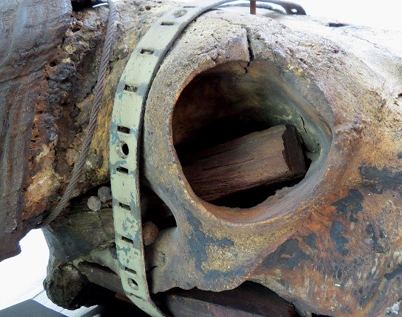 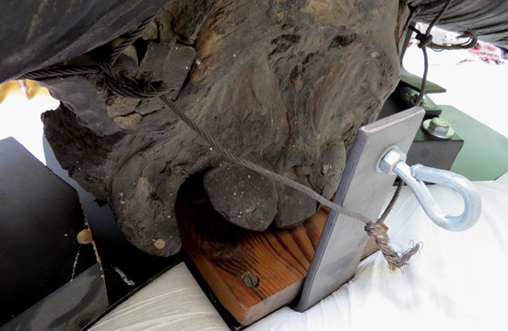 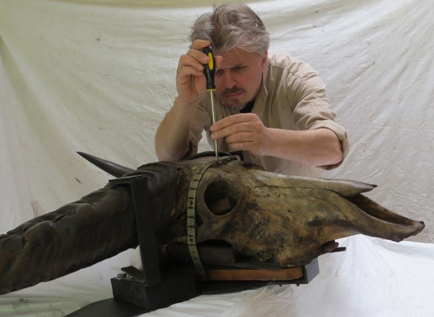 Above: the state of the skull before conservation work started with a variety of brackets, hooks, straps, cables and wooden blocks used in its support.

Condition of the specimen The skull was quite dirty, with patches of what appeared to be an old black varnish or similar substance adhering to the surface in places and with many droplets of white paint splattered over it, especially the top of the skull. Most of the teeth were missing, as were some of the bone into which they were naturally set. A lot of this had broken away, possibly from poor handling and mounting in the past. Some of the front teeth had been modelled-in with small pegs of wood, possibly to protect the delicate areas of bone that form the tooth sockets. 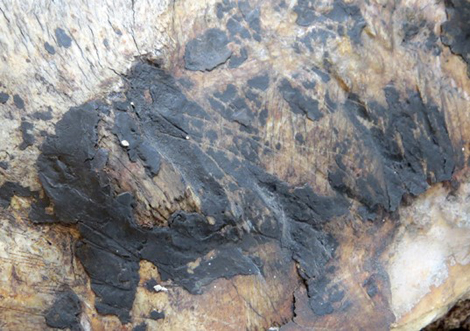 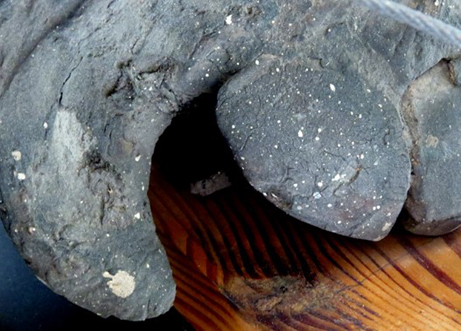 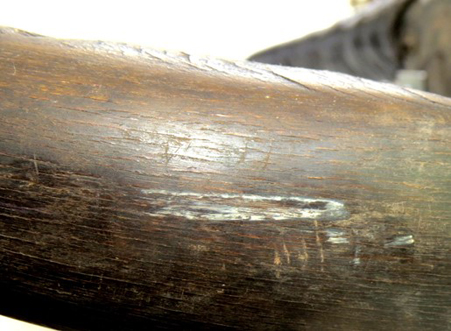 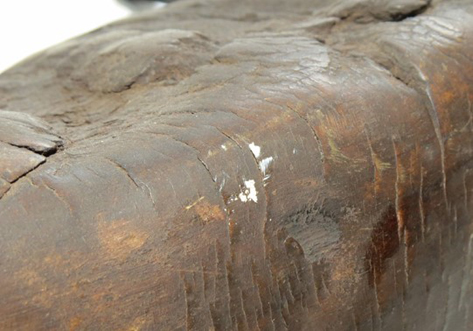 Above far left: the black varnish(?). Above left, splatters of white paint on the top of the skull. Right and far right: The horns have a naturally cracked surface and is quite rugose in places. In many areas there was white paint and scuff marks.

There was a wide variety of materials and techniques used to make the previous Ĺmountĺ. Firstly, there was a large wooden Ĺpegĺ (about 4cm diameter) forced into the rear of each orbit from above and behind, held in place with various nails. These wooden pegs have been carved at the top, but look very unsightly in the orbits. However, they appear to have been inserted to give the bases of the horns and horn cores some extra support, so that the weight of the horns are less likely to damage the skull. Therefore these Ĺpegsĺ should not be removed, unsightly though they are (below far left). The metal strap (that looked a bit like a Ĺheadbandĺ across the temple) was screwed into the forehead of the skull and into the small wooden planks underneath the skull.
The underside of the skull, including the palate, sat on several very old pieces of wood (see below). Some of these lay one on top of another and some have split. All this wood had to be removed. The old metal brackets that held the horns and took the weight of the specimen were quite straight, angular and ugly and needed to be replaced with something more appropriately sympathetic and less obtrusive. Both of these old brackets were screwed to a wooden block that in turn was bolted to the flat metal plate at the rear. The old brackets and their wooden blocks were removed, to be replaced with better metal brackets. The old twisted wire cable above the skull appeared to be doing nothing and was removed, as was the hook at the top of the backplate and the polypropylene thread at the base of the bracket. 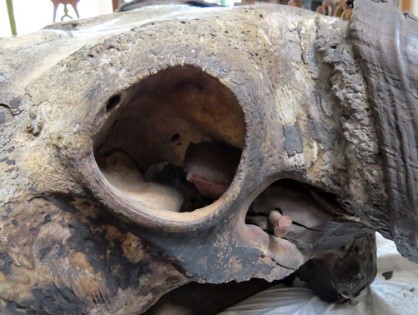 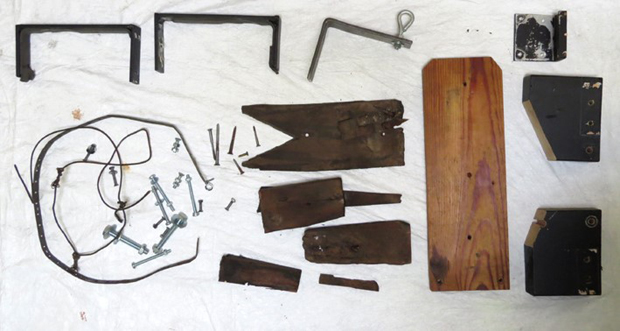 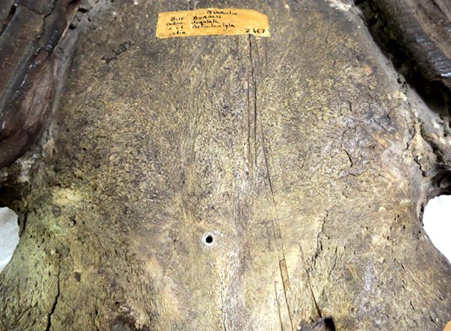 Above far left: the wooden Ĺpegĺ with hails inserted into the orbit from the rear. Above left: the pieces of wood underneath the skull. Above right: all the bracketing material, not including the large aluminium backplate. Above far right, the hole in the forehead from the screw holding on the metal strap.

Once all of this extraneous mounting material had been removed, the backplate was found to be made of aluminium. This meant that new brackets could not be welded to it. Therefore a new backplate had to be made, of 5mm thick steel. The shape of this largely followed the design of the old aluminium backplate but was made smaller and simpler to be less visually obtrusive. Two new brackets were shaped on a forge to hold the horns and skull in approximately the same place as the previous brackets, but a slimmer and more curved design was used, to be visually less obtrusive. Enough space was allowed for Plastazote foam to fit between the horn surfaces and the metal brackets. The brackets were welded to the back pate, the welding was trimmed and the metalwork sprayed a satin black. The surfaces of the skull and the horns were cleaned with Synperonic-A7 in deionised water, a small area at a time, and then Ĺrinsedĺ with swabs of just deionised water, keeping the bone and horn as dry as possible by constantly patting it dry with paper towels. Some areas had the thick black varnish(?) carefully picked off with scalpels. The brackets were lined with inert black Plastazote foam trimmed to size, glued on with Paraloid B72 adhesive. The hole in the forehead of the skull where the screw used to hold the metal Ĺheadbandĺ strap in place was filled with Japanese tissue paper and neutral pH adhesive which when dry did not need to be painted to match the surrounding bone as it was such a similar colour. 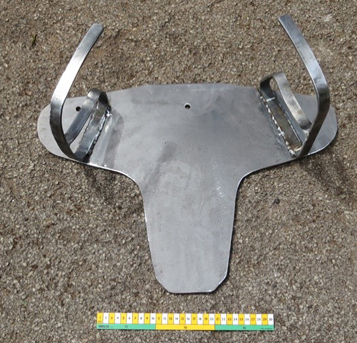 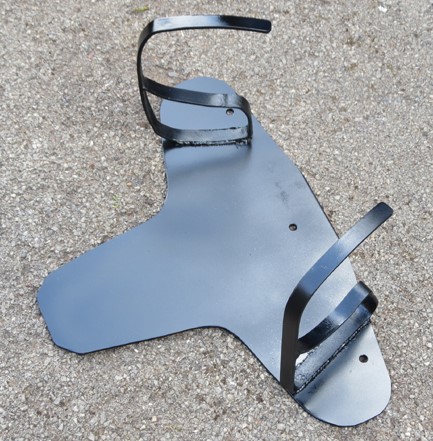 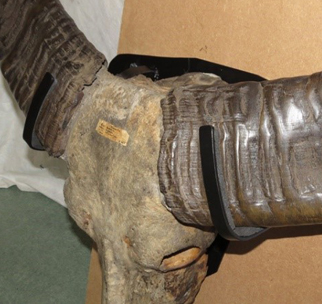 Above left: the new metal backplate with the new brackets welded on. Above middle: the bracket painted. Above right: the horns and skull in position within the Plastazote foam-lined brackets. 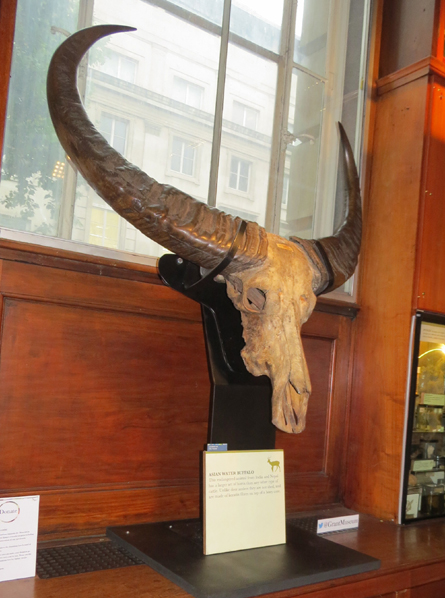 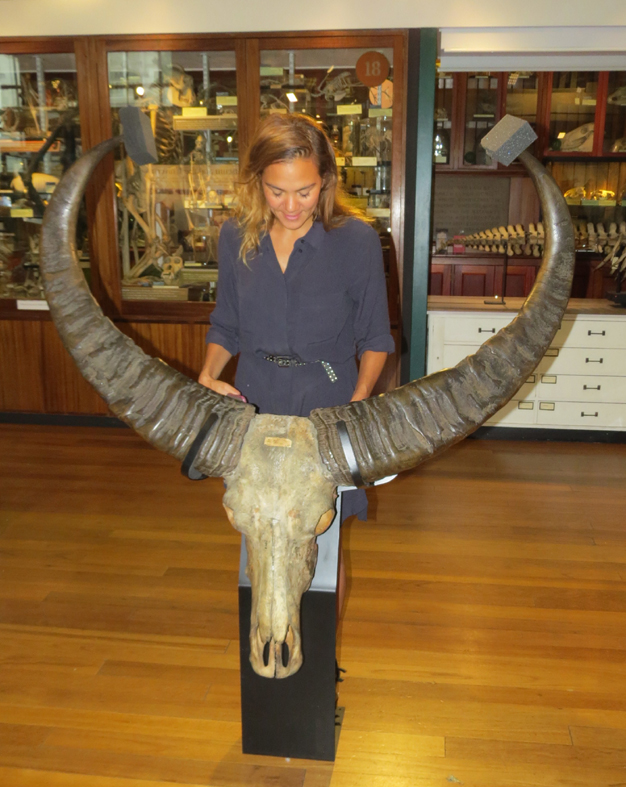 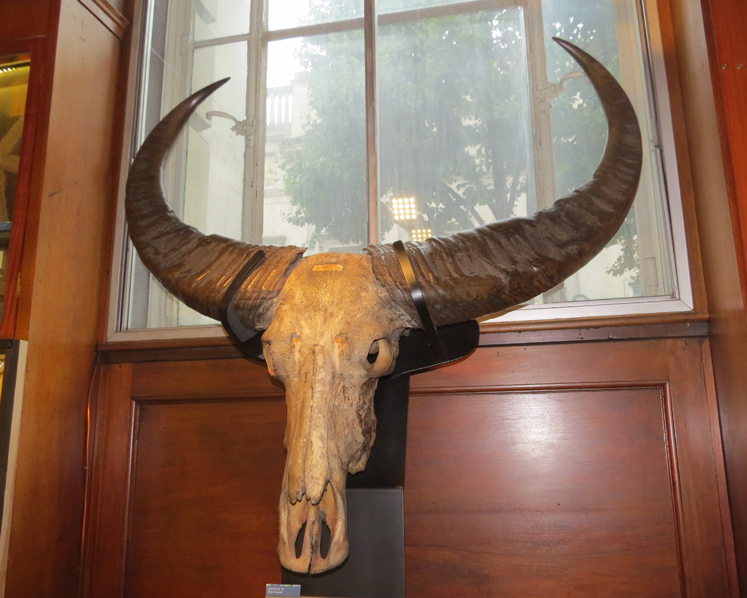 Above, the skull with a sense of scale and then back on display in the Grant Museum of Zoology, University College London. With thanks to Darrel of the British Museum who made the pedestal to which the new mount attached.