Assessing, cleaning, partially de-mounting and packing-up large cetacean skeletons suspended from the ceiling at a height of about 10 metres, at Cambridge University’s Museum of Zoology.

As part of Cambridge University Zoology Museum’s refurbishment process, the cetacean skeletons hanging from the ceiling inside the museum had to be assessed, cleaned, partly dismantled and wrapped-up for protection ready for a phase of building work inside the museum building. However, as the specimens were hanging about 10 to 12 metres from the floor, suspended from the ceiling, they were difficult to access to say the least. 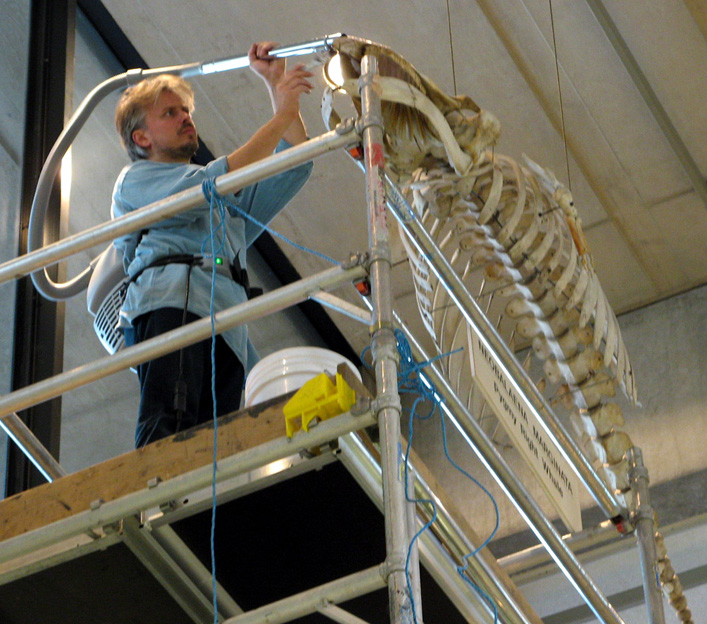 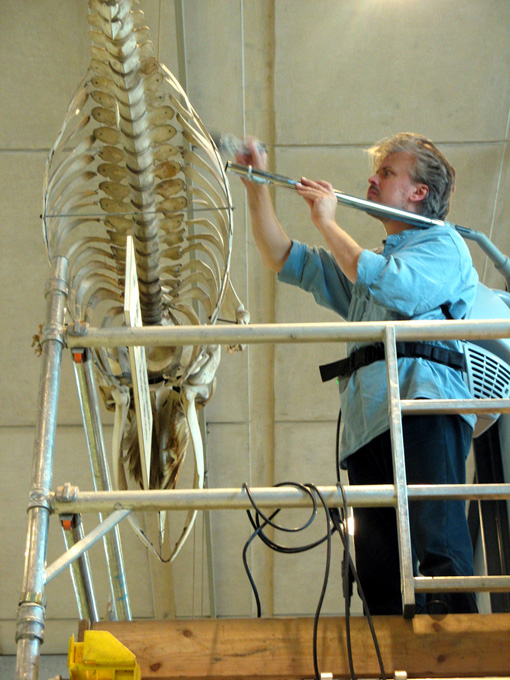 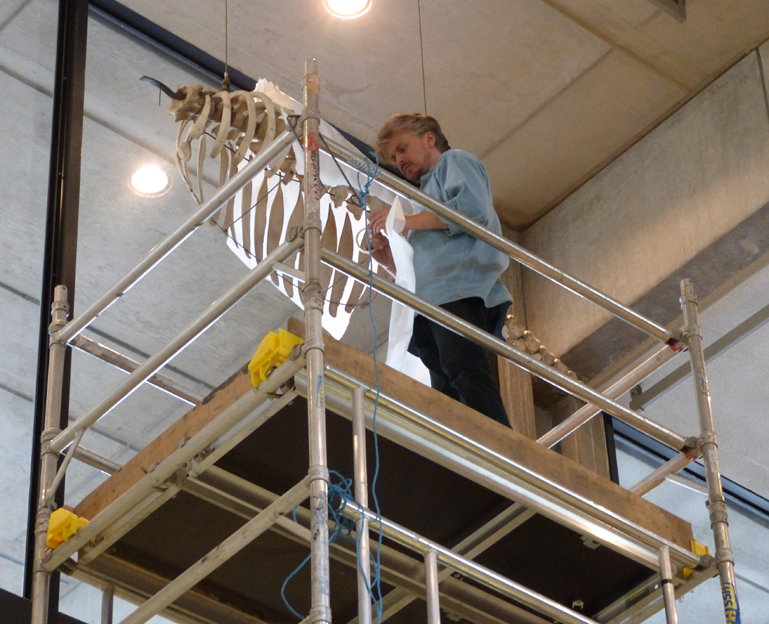 Using a tall mobile scaffolding tower was the best solution, but to erect one and move it around each of the large skeletons to work on them in the positions required, you have to be trained, pass a test and have a licence. The appropriate training was undertaken and Nigel Larkin is now officially a qualified 'PASMA' scaffolding tower erector, should you find that useful. Once at the top of the 10 metre high tower, the specimens first needed to be assessed, looking for and recording any damage and noting how the specimens were put together and how they would come apart. They then needed to be thoroughly cleaned with soft brushes and a vacuum cleaner (very usefully, a wearable 'Backuum' was available, see photos). After this the limbs had to be removed from the skeletons, and the skulls, leaving the vertebrae and ribs in place. The limbs and heads were removed as they would be the most vulnerable to damage whilst the place was a building site. Ideally the whole specimen would have been taken down in each case but as all the ribs and vertebrae were wired together this would not only have entailed a lot of work but it would inevitably have resulted in damage to the bones. It would also have created a lot more work putting the skeletons back together when reinstating the galleries and as space was at a premium and there simply was not going to be enough room to store these large skeletons for a couple of years. A good compromise was to remove the more vulnerable and scientifically more valuable heads and limbs. 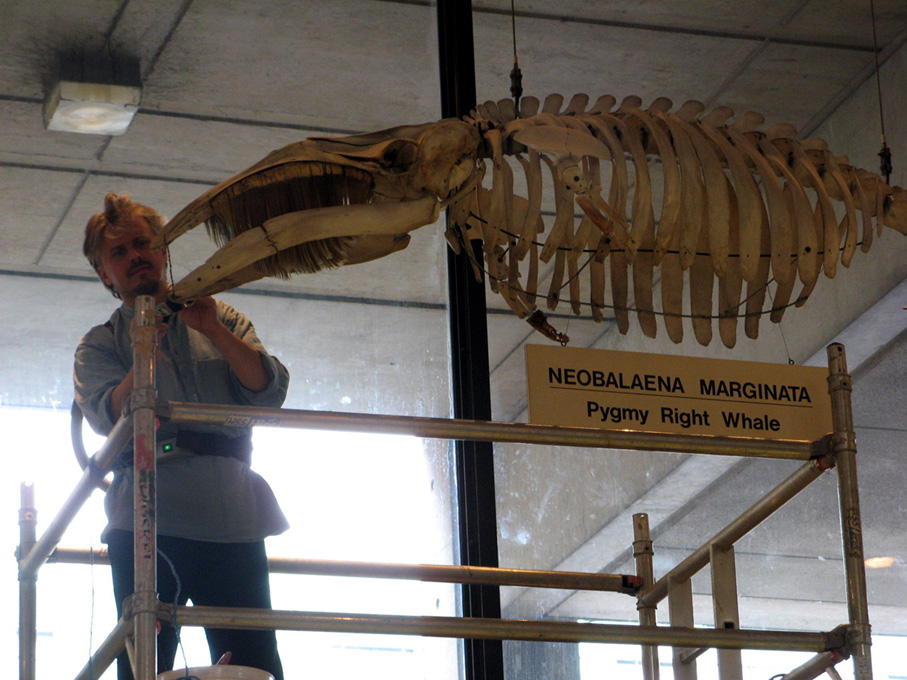 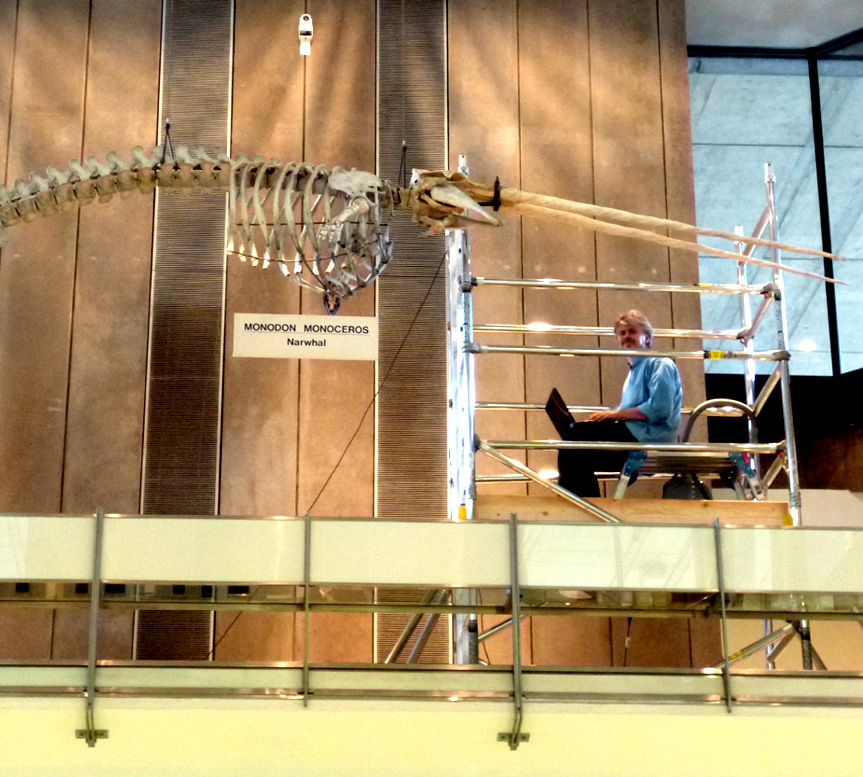 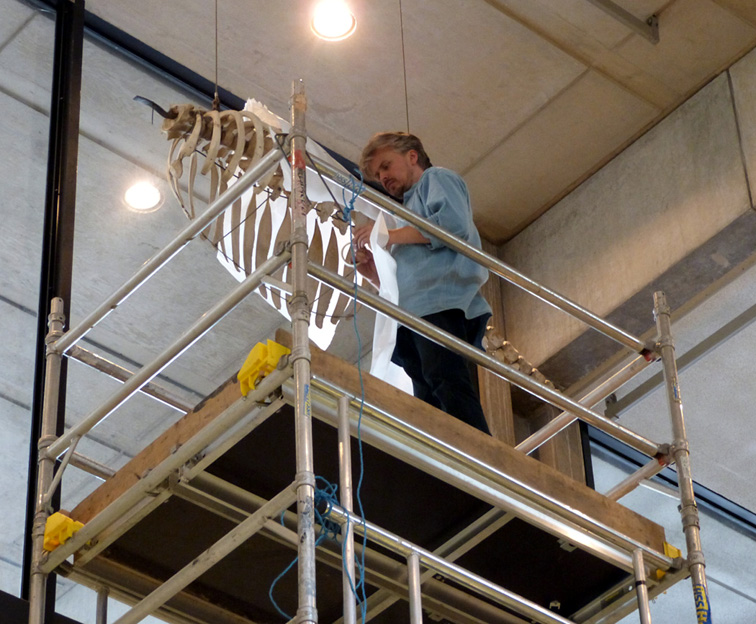 After assessing and cleaning the skeletons, making notes on their armature and removing the limbs and skulls, they needed to be wrapped for protection. Several layesr of acid-free tissue paper was taped around the rib cage and vertebrae of each animal, followed by a couple of layers of thick bubble wrap and finally a layer of Tyvek sheet (a strong archival, breatheable synthetic material made of high-density polyethylene fibers). 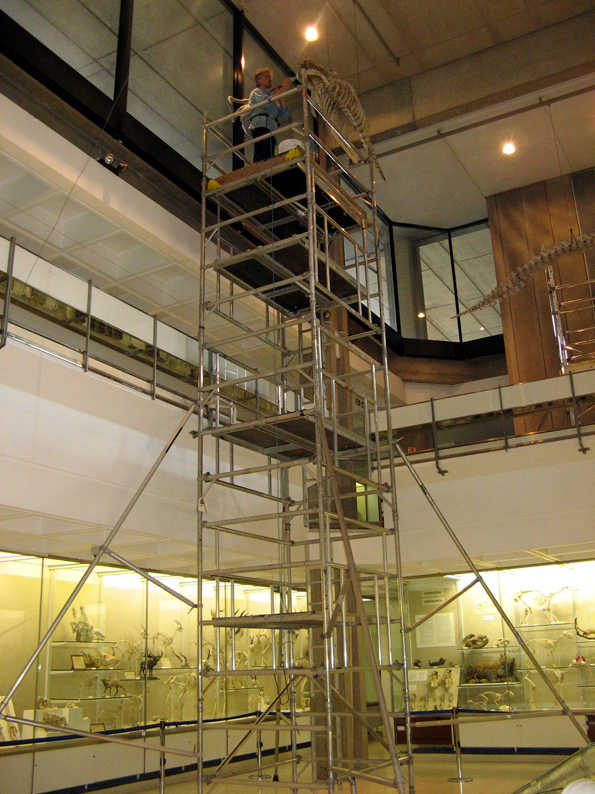 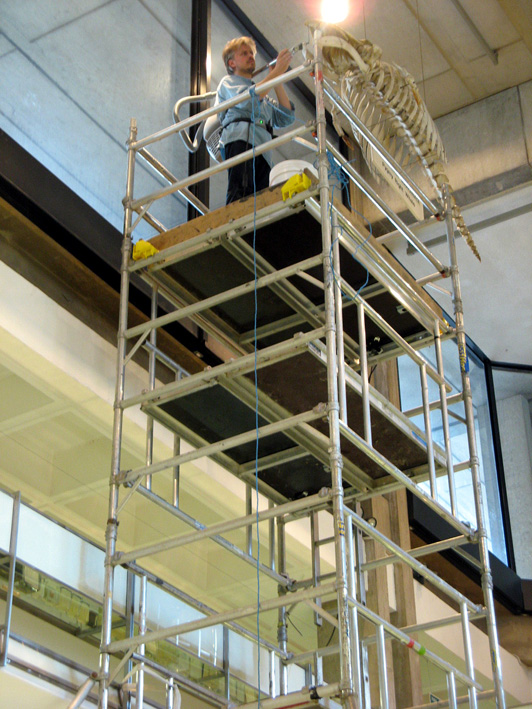 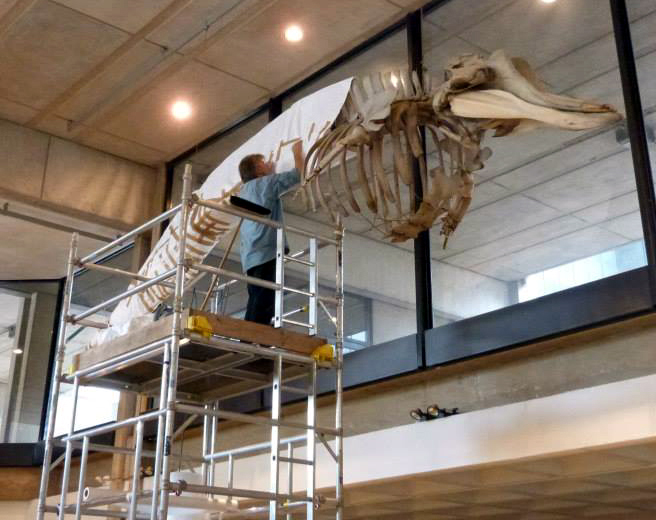 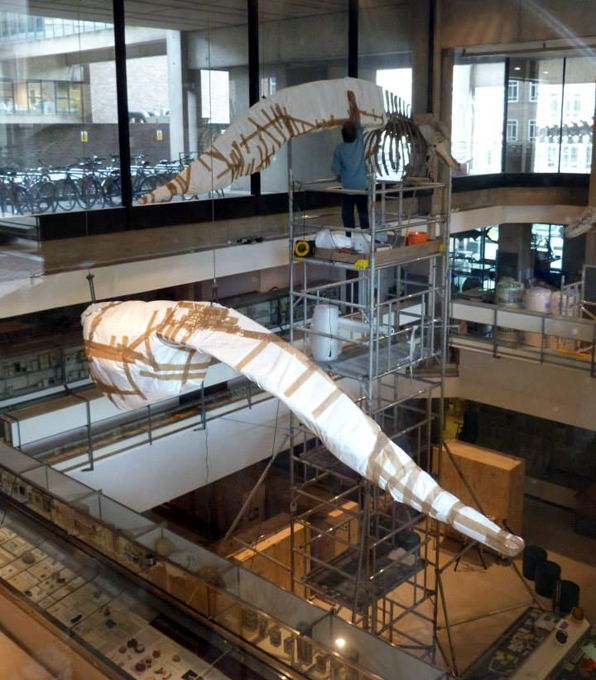 The five skeletons that needed attention were a Bottle-nosed Whale, Pygmy Right Whale, Beaked Whale, Orca and a Narwhal. The Narwhal was particularly problematic as not only was it a ‘double-tusker’ and the tusks were quite long, but they had cracks running through them near their bases. Luckily the Narwhal specimen was near one of the landings as it took two people to carefully lift off the head and tusks safely, even using two scaffolding towers to provide access, stability and support. The cracks were consolidated and repaired but the tusks will require extra support when rehung, for safety. The skull of the large bottle-nosed whale skeleton was so big and heavy it could not be removed safely, nor would it have been safe to lower this off the scaffolding tower. But the mandible was removed.
The various skulls, mandibles and limbs were all labelled and packed away in suitable archival storage media for the duration of the refurbishment project, and photographs of the demounting process and notes about remounting the bones were placed in the museum archive. 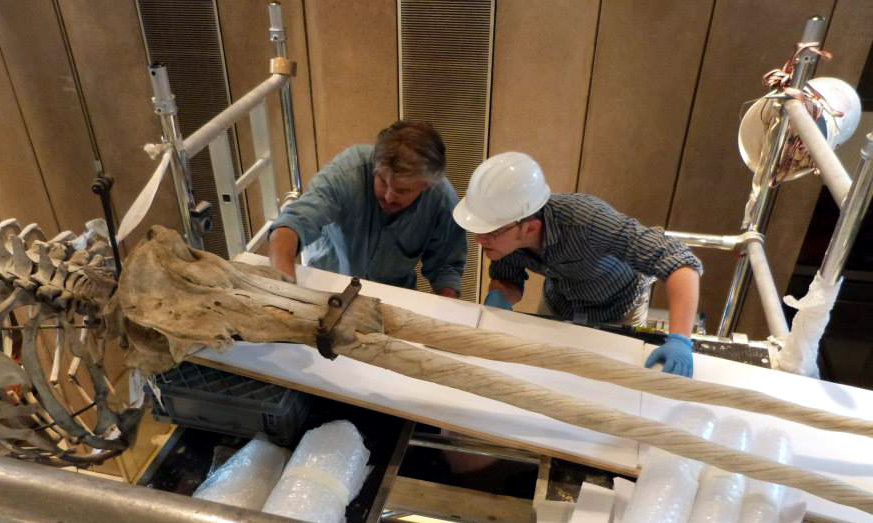 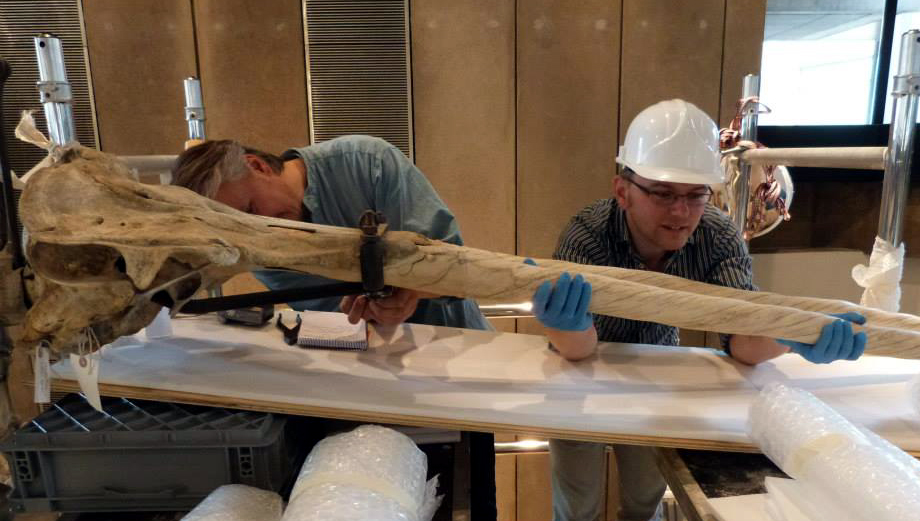 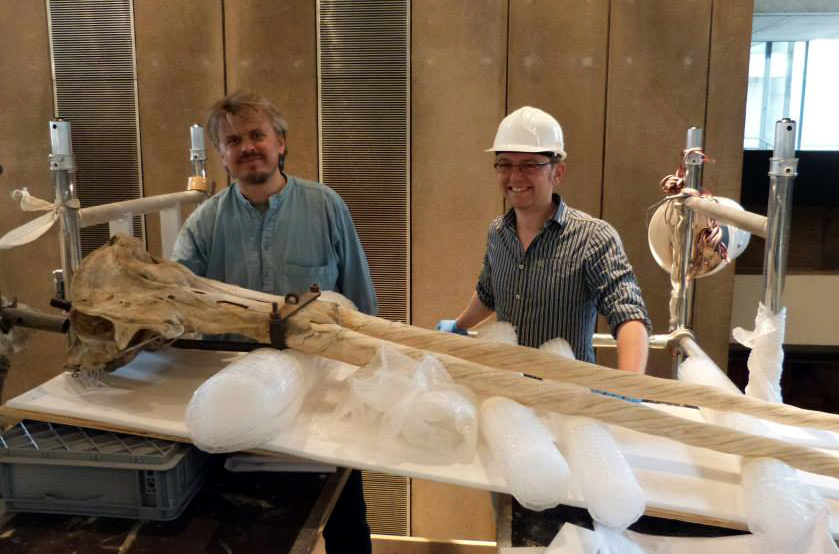 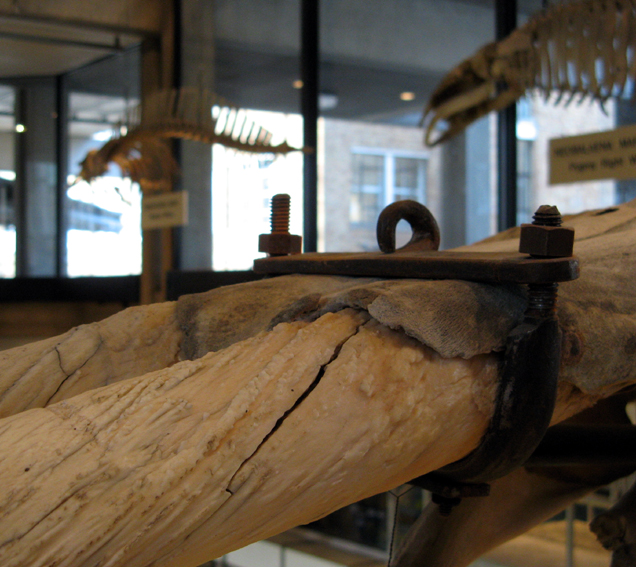 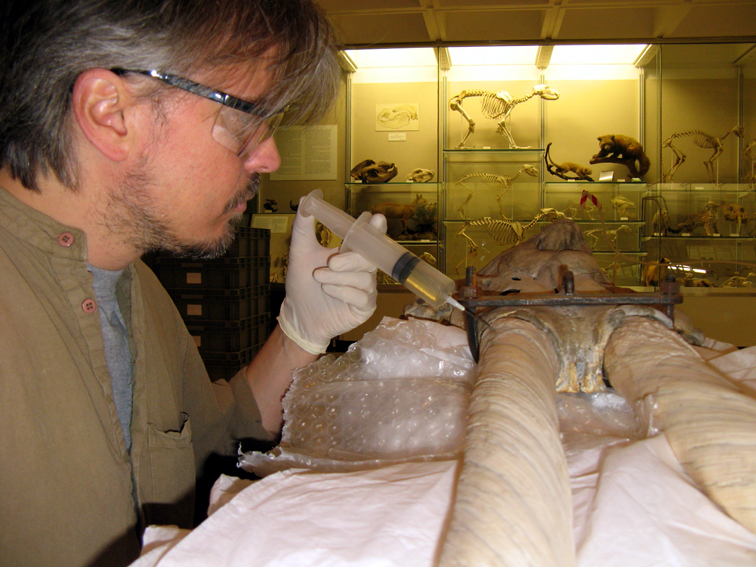 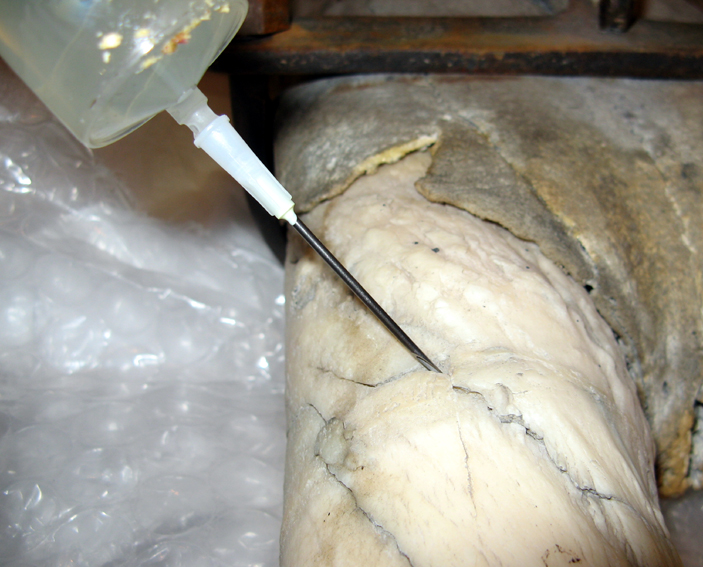 Above: Inspecting the narwhal skull and tusks, and removing them. Also, one of the large cracks in the tusks that required repairing with adhesive and consolidant, partly applied by injecting with a syringe 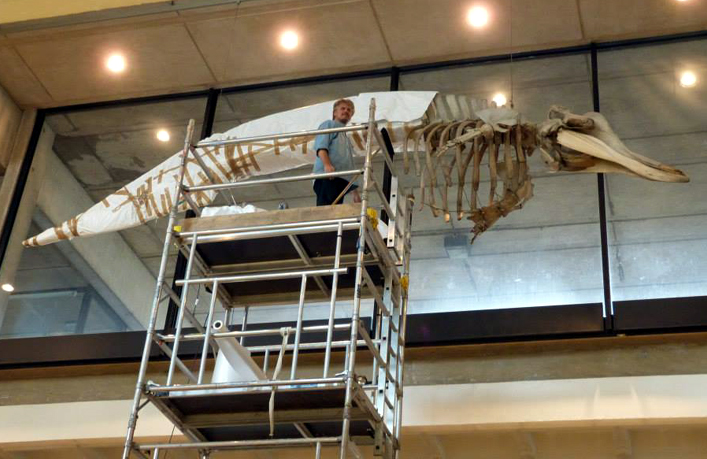