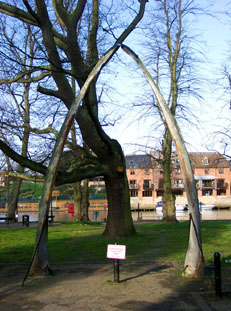 This whalebone arch is still in remarkably good condition, given that it is nearly 200 years old and has been standing outside in a park for many decades. However, it had been damaged by continual weathering over the years, and also by tree-roots, lawn mowers and by passers-by. A report was written on its condition by Simon Moore in 2004 and he suggeted that the arch be conserved, repaired, mounted on a plinth and re-erected somewhere safer.

The arch comprises the mandible of the Greenland Whale Balaena mysticetus and stand about 5 metres high joined at the apex by an iron fish-plate attached by bolts with hand-made nuts which will have become rusted into place. The arch is placed on two separate and small mortar plinths with an iron brace over each condyle to add support and to prevent accidental or purposeful damage to the base. The bones are additionally supported at the sides by a pair of wrought iron supports and attached by coach bolts, nuts and washers about 1.5 metres from the ground.

Composition
The inner part of the mandible comprises compact bone and is enveloped, along the outer edge, by a larger area of cancellous bone. The latter comprises a honeycomb of osseous struts giving strength but not too much weight. The filtering baleen would normally be attached to the harder compact bone area.

Condition
The mandible has been treated in the past with resin in-fills and a layer of PVA to the exterior. After weathering for many years the PVA layer is delaminating and becoming undermined by microscopic algae, resulting in gradual detachment. The cancellous bone has been holed in various places making ideal homes for spiders. The compact bone (which is quite brittle) has been slightly covered in graffiti but is still intact. 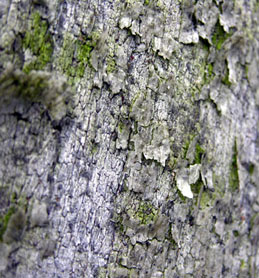 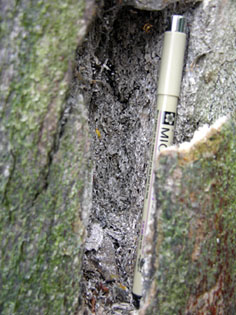 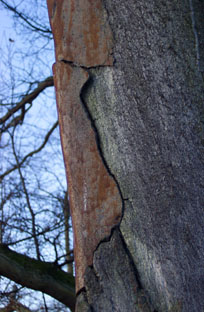 You can see in these photos algae growing on the bone surface, the old PVA consolidant flaking off and gaps in the cancellous bone.

Treatment
The heavy bones and their ironwork were lowered carefully to the ground and after unbolting them they were carried indoors where they could dry out slowly prior to treatment. The bones were cleaned then conserved using Butyral polymer as a consolidant for the entire arch. Holes were gap-filled loose pieces glued back into place. Loose delaminating fragments of bone were re-attached. 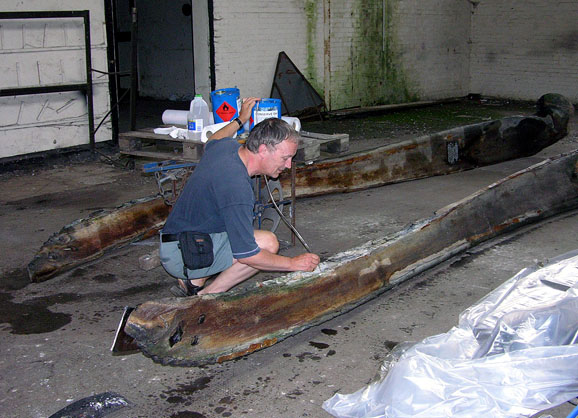 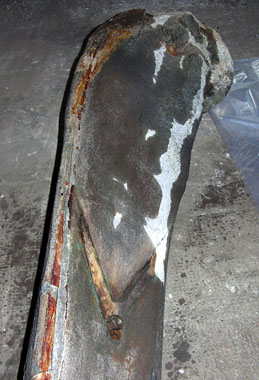 Once the bones were cleaned, consolidated and repaired they were ready for re-erection.