Packing and moving an orangutan on a very fragile ënestí in a tree, with other nests, at Cambridge University Museum of Zoology.

For many years there has been on display in the Cambridge University Museum of Zoology a ëstuffedí male orangutan from Borneo sitting on a ënestë of leaves and branches in a tree that also contains two other (empty) orangutan nests (see photos below). The nest in which the orangutan sits is thought to have been made by it to offer some protection against the wind according to the donor. The orangutan, the tree and the nests are over a hundred years old (accessioned in 1899). As part of the refurbishment of the Zoology Museum (2013 to 2016) all the specimens had to be moved off display and into temporary storage. This part of the display presented quite a challenge. The nests, being so old, were incredibly fragile as well as complex. They could not be taken apart and rebuilt without suffering a huge amount of damage and losing the integrity of their original structure. Also, the orangutan was mounted firmly on to the tree with a hidden, unknown, method and likewise could not be moved without suffering damage itself and it would also have greatly disturbed the very fragile nest material it was sitting on. Therefore the decision was taken to devise a means of packing up the whole display so it could be transported as one object. At time of packing, it was not certain where the specimen was going to be stored so the packaging method was designed to cover all eventualities, even robust enough to survive road transport if need be. 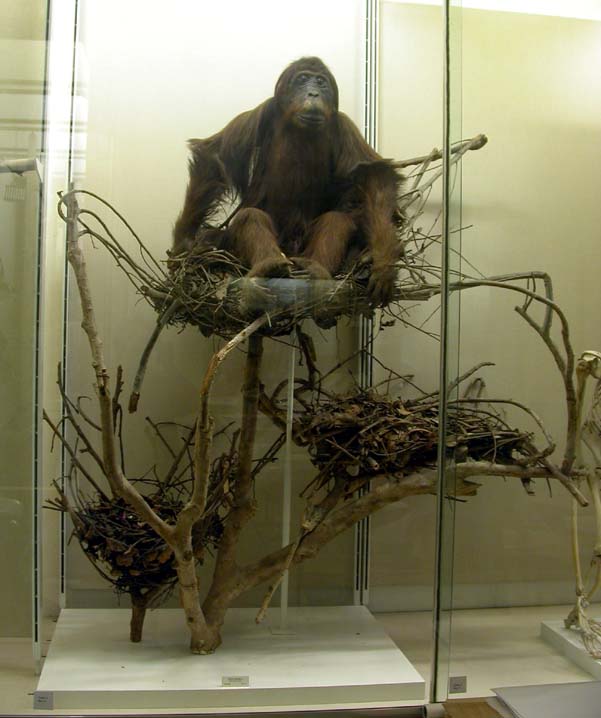 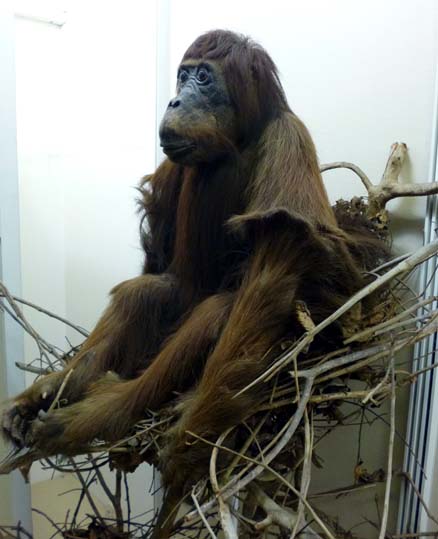 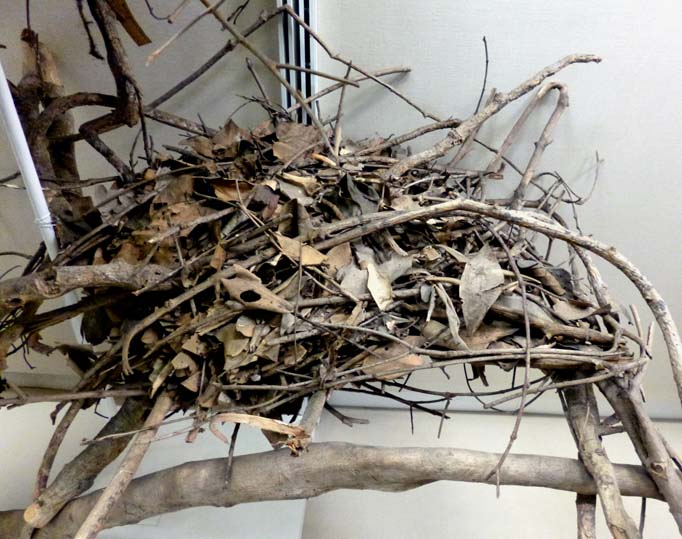 Cleaning: First, the specimen had to be cleaned. Not only would it have been bad practice to pack it up and move it to a new storage area whilst it was still dirty, but in the absence of any notes about previous conservation treatments (records were checked but found wanting), we had to assume that the fine black dust covering the specimen may in fact be an old insecticide and possibly deleterious to human health. Packing the specimen without cleaning first would inevitably have led to the dust being disturbed and not only being inhaled by the person packing, but it would have spread around the museum. However, the leaves were far too fragile to touch as they would crumble easily if disturbed, and also we could not risk displacing them and reducing the integrity of the nest. So, a rubber bulb 'puffer' normally used to clean camera lenses etc was used to gently blow dust off the specimen and into the nozzle of a vacuum cleaner held nearby but at a safe distance ñ close enough to capture the dust that was blown towards it but not so close it was in danger of sucking up even the smallest leaves and destroying them (see photos below). This was a very time consuming task, but necessary. This method was used to thoroughly clean the branches, the nests and the orangutan. 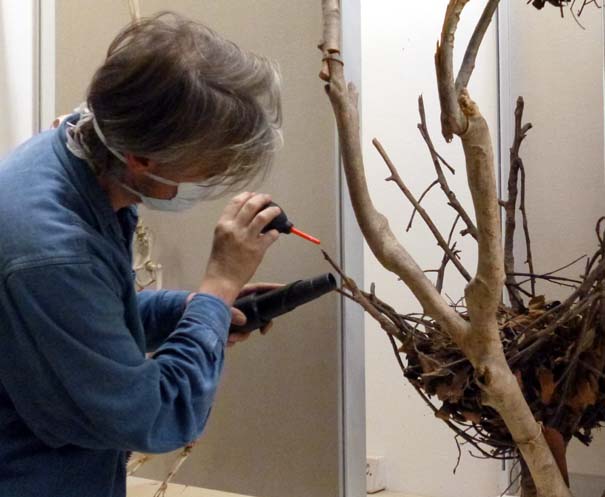 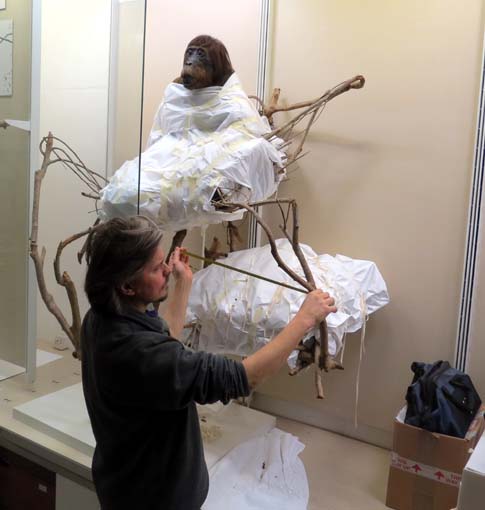 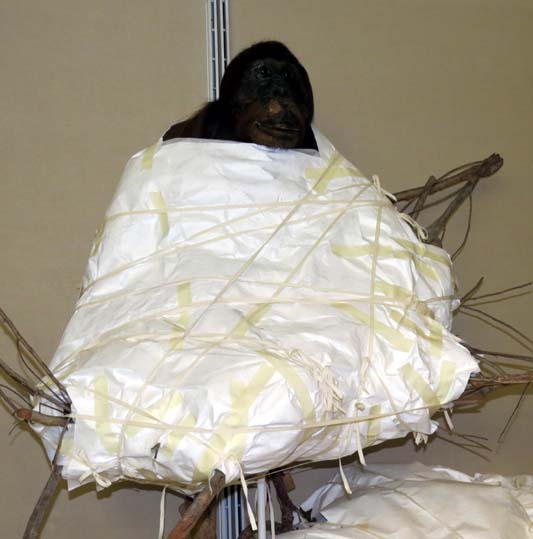 Packing: The method devised to hold the nests, branches and orangutan securely in place was: to gently wrap acid-free tissue paper around them; then wrap strips of Tyvek in place around them, tied in place securely with cotton tape; then secure wooden batons from one side of the crate to the other so that they were strategically placed just below each nest or branch where they could be lined with inert Plastazote foam and give support so that the specimens would not move. In this way the branches, nests and orangutan were all held in place very securely and gently with only archival material touching them. This necessitated making a sturdy bespoke wooden crate to move the whole specimen in, and making it fairly early on in the process as this method of securing the specimen required three sides of the crate to be in place (see photos below). A plumb-bob was used to work out exactly the size of the box required, making it just slightly bigger than the specimen itself and making sure that it rested on large batons so that it could be lifted easily with mechanical handling devices. The external dimensions of the crate were 159cm cm long, 94cm wide and 187cm tall. It was made from 8 sheets of 12mm thick plywood (122cm x 240cm) and 20m of batons 35 x 45mm. The crate is designed so that when it needs to be moved to its temporary storage area and when it is moved back to the display area again, the front side of the crate can be removed so that the specimen (both the orangutan and the nests) can be watched to see how much they move when handled, so that if there is any swaying or vibration the transport can be slowed down or changed. 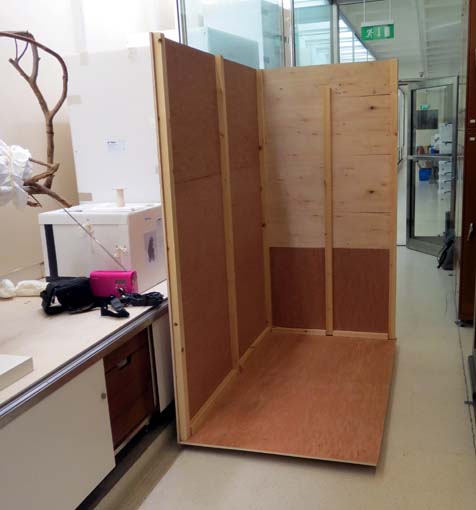 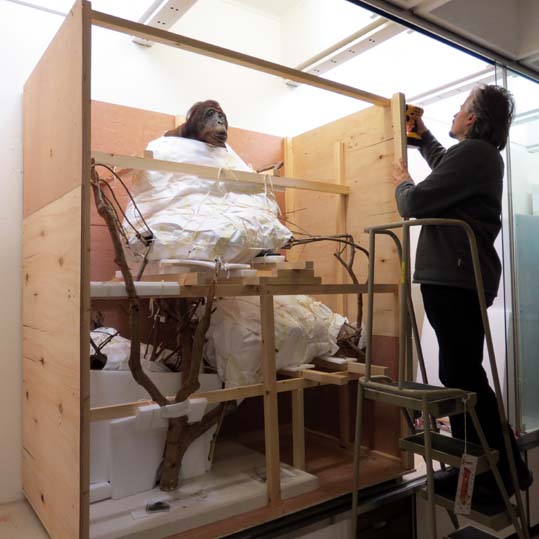 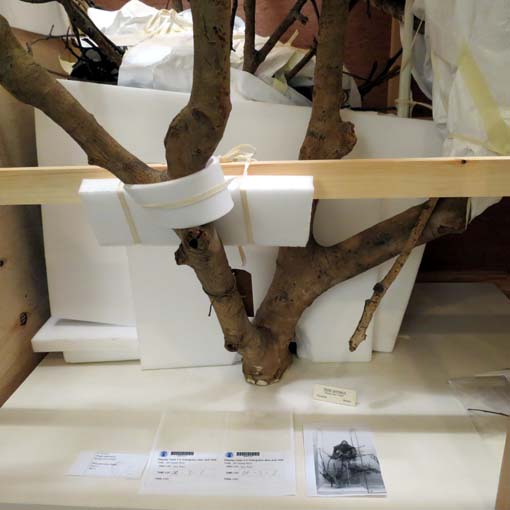 Health and safety: Before work started we checked the specimen records for previous treatments but none were listed. However, the assumption had to be made that both the orangutan and the leaves of the nests ñ and possibly also the branches - must have been treated at some point in the past with some sort of pesticide. Therefore a mask was worn when cleaning the specimen, and disposable gloves were usually worn when cleaning and handling the material. Some of the dark black powder that was removed from the specimen by cleaning was kept for analysis. Care was taken to clean the whole area around the specimen after work was undertaken, on a daily basis. The specimen was labelled with signs to warn people of the risks of contamination with pesticides when unpacking the material in a couple of yearís time. This risk was also noted on the specimenís records. To reduce any risk of injury mechanical ëstackersí on wheels were used to lift the partially assembled wooden crate to the right height beside the specimen so it could be slid into the crate easily. This was a two-person job, for safetyís sake. The specimen did not have to be lifted either, just gently manoeuvred. The conservator had been on a training course to enable him to safely use the electric bench saw to cut the large plywood sheets for the crate. 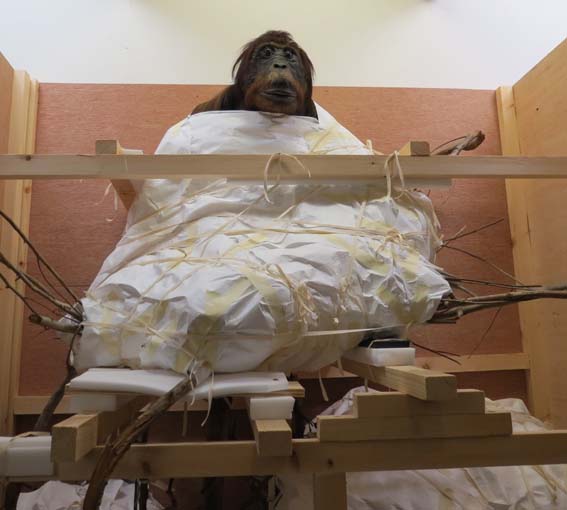 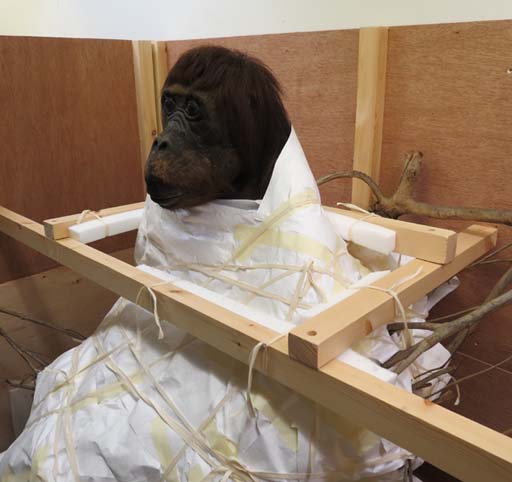 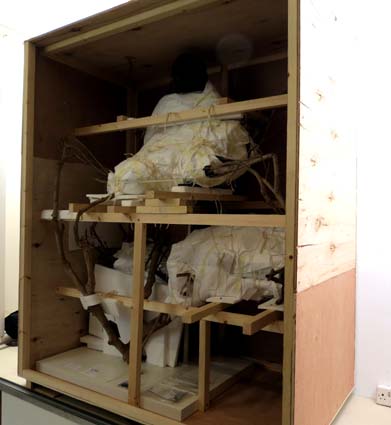 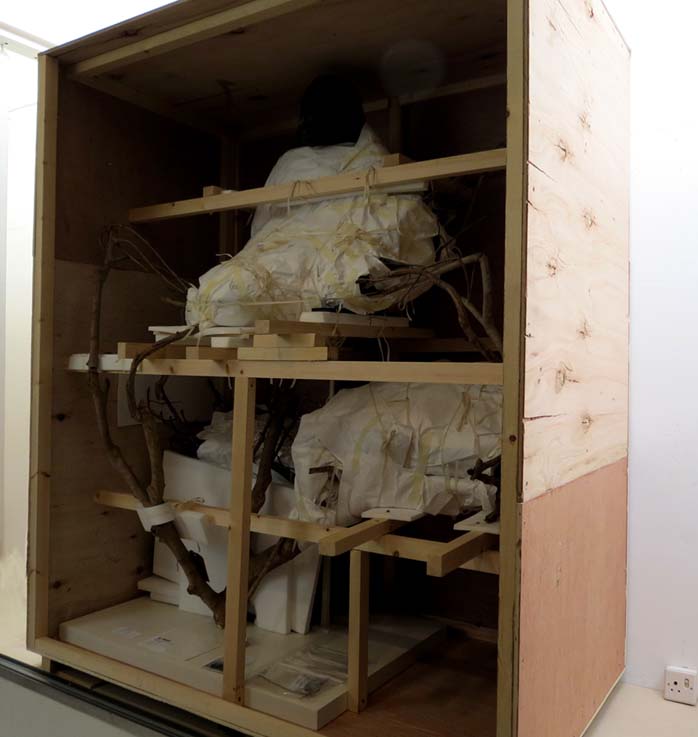