The Whitby ichthyosaur at the Hancock Museum: Conservation Report regarding dismantling the specimen

The wall-mounted ichthyosaur from Whitby, approximately 4.6m long, is a very large specimen consisting of a relatively complete skeleton. The only significant pieces missing are the rear limbs. The project was to remove this specimen from its mount on the wall of the gallery and package it up prior to the museum being emptied and refurbished. 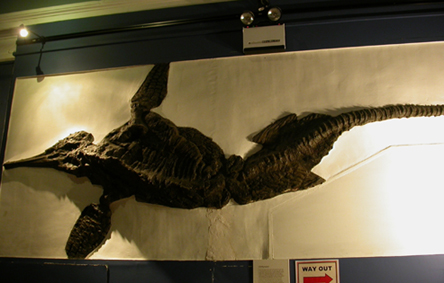 My first priority was to assess the specimen and its immediate surroundings and to plan a methodology for safe working. The specimen was mounted on the wall from two to four meters high on a first-floor landing, at the top of a long flight of stairs. The stairs and landing were in constant use by people moving specimens and packaging material. In view of the busy nature of the area and its location at the top of stairs on a narrow landing it was imperative that I kept the area free from rubbish, tools and trailing leads. I used my clip-lights and extension lead to provide additional lighting as some lights had been dismantled or were inoperative, and clipped the leads high up on the wall to reduce trip-hazards. A sturdy platform ladder was used to gain access to the specimen, and when larger blocks were removed from the mount, a sturdy scissor-jack lift was used to lower the blocks. Steel toe-capped boots were worn throughout the process, and goggles, dust masks and gloves were used as and when necessary. Rubbish (the detritus from dismantling the surrounding wood and plaster mount) was swept up regularly and moved out of the way. 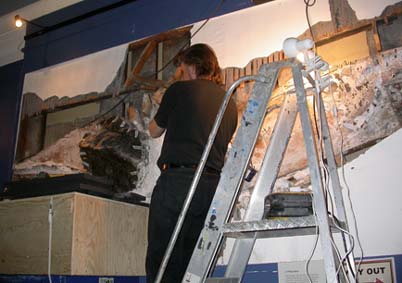 The specimen, a series of large and small blocks of matrix containing well-fossilised bones, had been mounted in what appeared to be a rather ad-hoc fashion onto a large wooden frame. This frame had been filled-in with an assorted variety of ‘scrap’ wood nailed into strategic positions. Large nails were hammered into these pieces of wood and around them was applied plaster of Paris and occasionally mortar, and the various pieces of the specimen had been laid on top whilst this was still wet, to adhere onto the plaster/mortar.

The plaster and mortar back-filling sometimes contained fragments of bricks and fragments of terracotta tiles to bulk it out. A few metal brackets had then been screwed into place to help to hold the larger blocks in position once the whole frame was erected vertically. A gap-filler of coarse, dark mortar had been used to fill between many of the blocks. 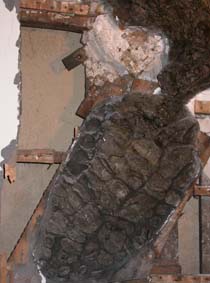 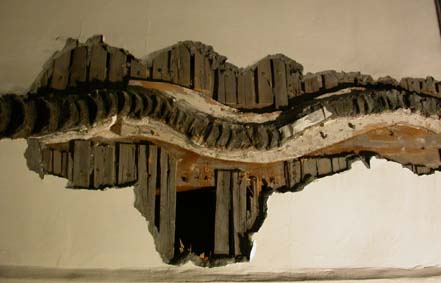 The individual fossil bones of the two forelimbs had been arranged on boards in mortar and gap filler and the boards screwed in to place. This method was also used for the end of the tail (the last twenty-or-so vertebrae). Some of the bones of the front left limb have disappeared over the ensuing years (they were in reach of the public) as have some of the tail vertebrae (which, interestingly, were not within reach of the public). The whole specimen, once mounted and erected vertically on the wall, was surrounded by a series of lathes nailed on to studwork, and these were covered with a thin mortar.

Once an assessment had been undertaken of how the specimen had been mounted, the skeleton was carefully taken apart after record photographs had been taken of the whole specimen. This necessitated the removal (with hammer and chisel) of the surrounding lathes and mortar, all the plaster of Paris surrounding the specimen, and the mixture of mortar, plaster of Paris and other gap-fill material that surrounded the bones and into which they had been embedded.

It was clear that the specimen consisted of a series of small to large blocks of fossil and matrix and that it would come apart in many pieces. To assist putting the specimen back together again at a later date, masking tape was placed either side of the cracks along which the specimen would clearly separate, and identical alpha-numeric annotations were written on the tape either side of the crack. Associated pieces of the specimen were laid with one another in their correct juxtaposition in large sturdy stackable plastic crates lined with Plastazote foam. Crumpled acid-free tissue was wedged between the material to keep the pieces separate from one another to avoid damage whilst in transit. br> 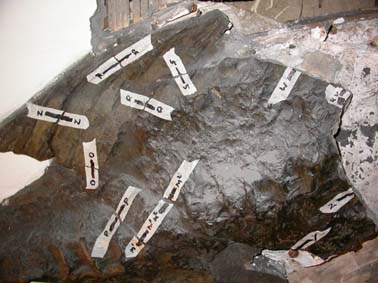 No new cracks were observed to open up in the blocks, they seemed to separate clearly along the lines of the old gap-fillers. One area of the abdomen consisted of an assortment of rib fragments mounted poorly in mortar. None of these seemed to be associated with one another and looked at odds with the rest of the fossil. It is possible that these are even from another specimen.

A handful of times a small fragment broke away from the edge of a block and in this instance consolidant was applied to the broken area (Paraloid B72 in acetone at 10%) and when this had set adhesive was applied from a tube (Paraloid B72 (methacrylate co-polymer)) and the piece re-adhered. 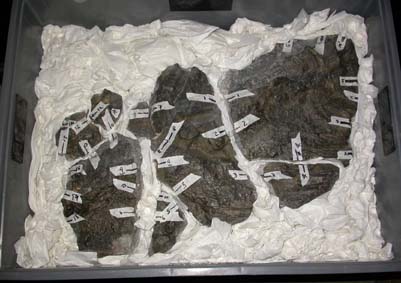 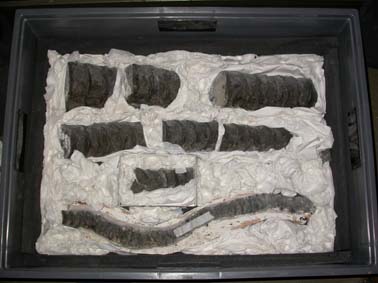 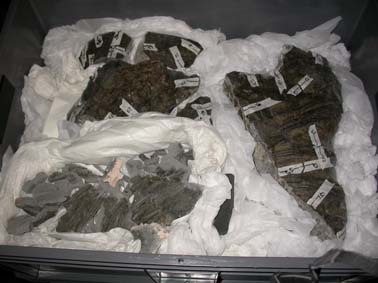