Moulding the horns of a Rhinoceros to make replicas for display.

If you are thinking of purchasing casts of rhino horns, scroll down to the bottom of this page

There have been many thefts and attempted thefts of rhino horns from museums in recent years. See:
Norwich staff foil smash and grab rhino horn theft
Museums Association: rhino thefts
International Rhino Foundation: Museums told to remove rhino horn from display
Therefore many museums are either taking their rhino skulls and horns off display or are wanting to replace the horns with replicas. To help with this, we found a suitable museum specimen that we could mould to make painted replicas. Although we take all the precautions possible when moulding a specimen to make sure that it remains unadulterated by the process, in this case we also chose a specimen (below, left) that had the least amount of scientific data associated with it as it would be of little use to anyone wanting to carry out biomolecular research at a later date (we wouldn't want to inadvertently alter the biomolecular integrity of a useful specimen).

First, the horns of the specimen were cleaned gently with a small soft dry brush and tweezers to remove fluff and fibres. Then it was swabbed with a very mild conservation detergent, cleaning small areas at a time and patting it dry with a paper towel immediately. The horns were then treated with a water soluble barrier layer to protect them from the moulding rubber. All gaps, holes and cracks were filled with a water soluble putty to make sure that no rubber penetrated the specimen (as this would lead to damage of the horns when the rubber mould was removed). Also, the putty was smeared thinly over particularly hairy areas so that no hairs would be removed during the de-moulding process. This temporary water soluble putty is made of precipitated chalk, glycerol and PEG (poly ethylene glycol).

Once the specimen had been protected from the moulding process as described above, two layers of silicone rubber were applied to one side of the horns (right), both layers thickened partially with thixotropic additive to make it more of a paste than a liquid so that there would be less chance of the rubber penetrating any remaining cracks. Once this rubber set, the rigid part of the first half of the mould was made and the specimen was very carefully turned over with the mould attached and the second half of the mould was made in the same way.

After all the materials had set, the specimen was very carefully de-moulded and the rhino horns cleaned gently. The water soluble putty was mostly removed with small wooden tools and a brush dipped in clean water, wiping away all excess water immediately. This dissolved the remaining putty and the barrier layer. Care was taken not to drench the specimen in water but to clean small areas at a time and dab them dry with a paper towel so the specimen did not get too wet.

These casts are made from an acrylic resin and woven glass fibre mat and are painted with artists acrylic paints. The outside curve of the larger horn is 36cm. They are available as a pair joined together as seen below for 145 GB pounds, or separately: 80 GB pounds for a large horn, and 65 GB pounds for a small one. If you would like a replica horn, or pair of horns, do please get in touch. 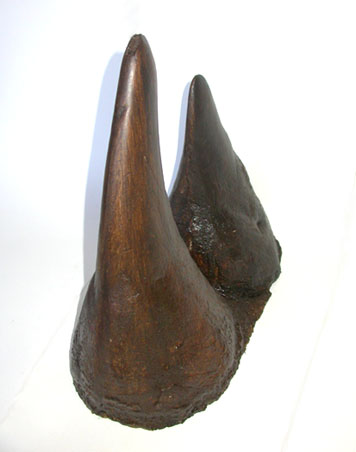 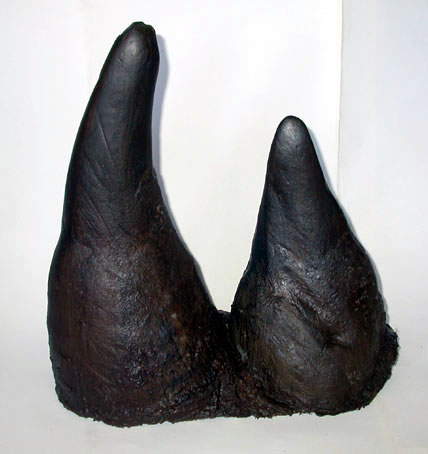 Update: Since undertaking the project above, we have moulded another pair of rhino horns to produce replicas (see images below). The outside curve of the larger horn in this pair is 52cm. These casts are made from an acrylic resin and woven glass fibre mat and are painted with artists acrylic paints. They are available as a pair (but not joined together like the ones above) for 165 GB pounds, or separately: 90 GB pounds for a large horn, and 75 GB pounds for a small one. As you can see from the image on the left they can also have the word 'replica' attached to them to reduce the likelihood of an attempt at theft. 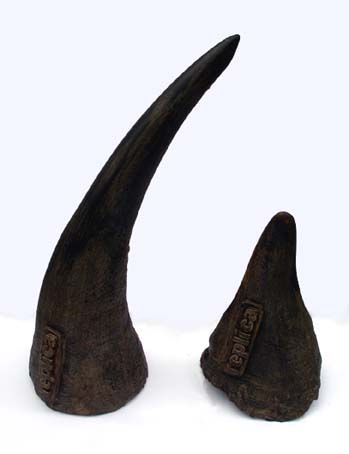 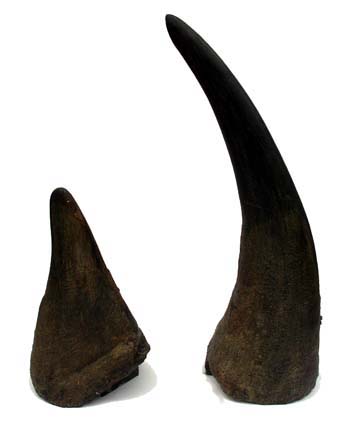