The excavation of a Holocene whale skeleton in Abu Dhabi in 2009, including lifting a fragile whale skull 4 metres long by 2 metres wide

In 2008 a rescue excavation was undertaken to remove some of the bones of this very large sub-fossil whale skeleton (of a humpback or blue whale) in the well-described sabkha sequence exposed in the Musaffah Industrial Channel of Abu Dhabi (United Arab Emirates) to stop them being weathered and to save them from falling out of the low cliff in to the sea. The partial excavation in 2008 can be seen here. 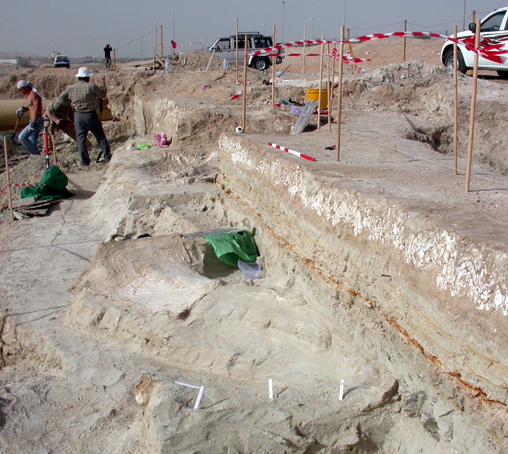 In 2009, a second phase of excavation was undertaken to remove the huge skull, the remaining limb and one half of the mandible, and as many vertebrae and ribs as possible. The team included Nigel Larkin, John Stewart and Phil Rye, assisted by Will Higgs - all of whom had worked on similar material in Abu Dhabi before, and most of whom had undertaken the rescue excavation the year before. Nigel was in charge of the fieldwork logistics and the conservation and lifting of the bones. The specimen was exposed in a low friable sandy cliff on the edge of a tidal channel in Mussafah on the outskirts of Abu Dhabi City. First, the overburden had to be removed carefully and the general outline and extent of the bones ascertained. Then they were excavated, with much of the sediment kept for analysis including the identification of molluscs, barnacles, foraminifera and ostracods.
The first phase of this project has been published and more will follow. See Quaternary Science Reviews (November 2011): Biotically constrained palaeoenvironmental conditions of a mid-Holocene intertidal lagoon on the southern shore of the Arabian Gulf: evidence associated with a whale skeleton at Musaffah, Abu Dhabi, UAE. By J.R. Stewart, S. Aspinall, M. Beech, P. Fenberg, P. Hellyer, N. Larkin, S.W. Lokier, F.G. Marx, M. Meyer, R. Miller, P.S. Rainbow, J.D. Taylor, J.E. Whittaker, K. Al-Mehsin & C.J. Strohmenger. 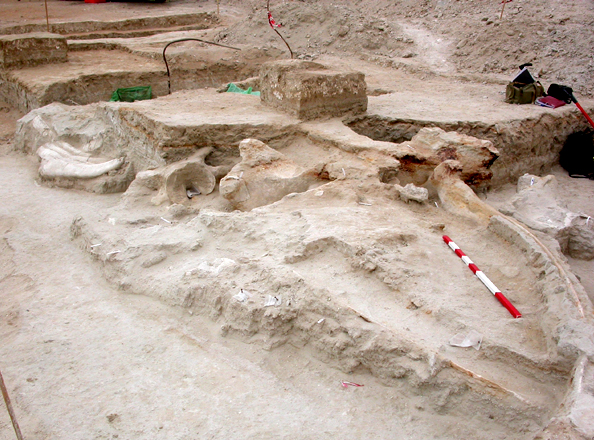 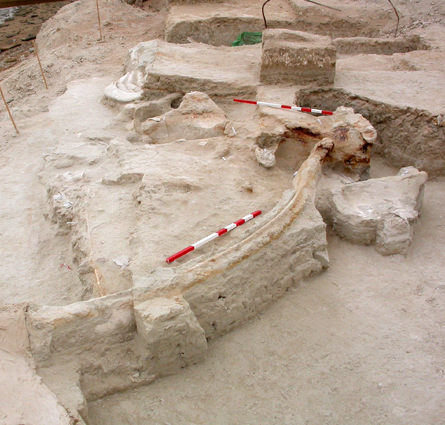 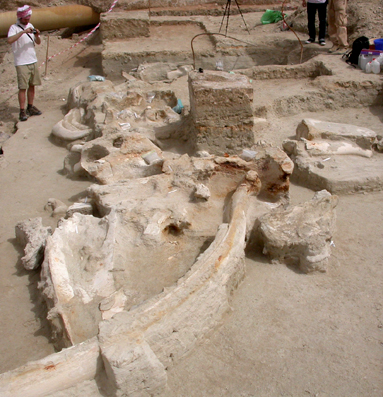 Above left: The site as we'd left it in 2008, with some more overburden removed. Above: The site after several weeks of careful excavating and sampling with the skull and mandible in the foreground. 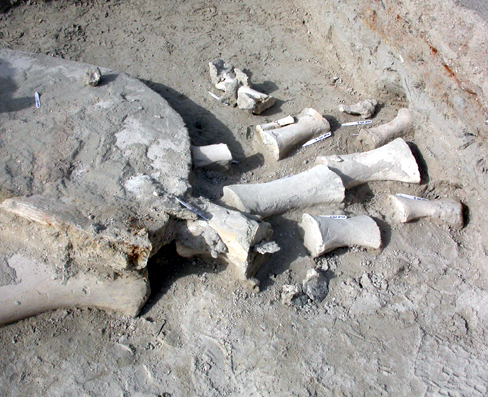 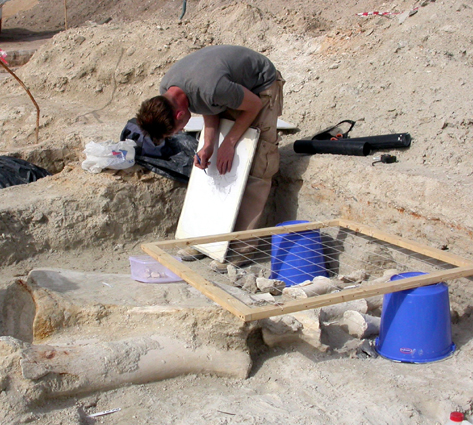 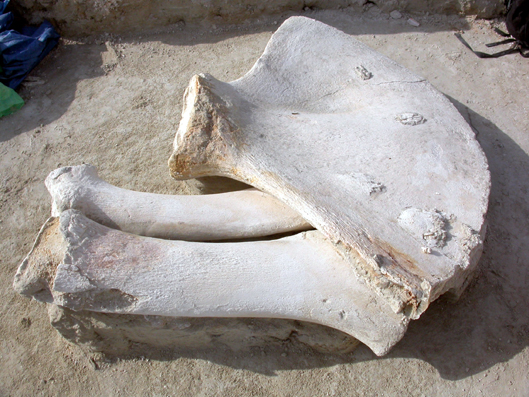 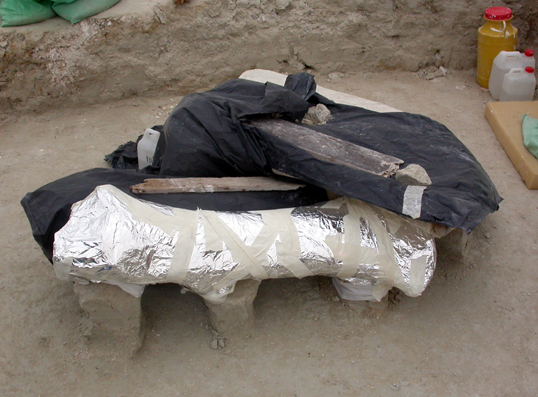 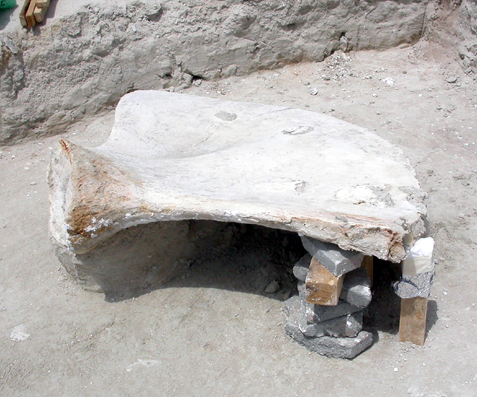 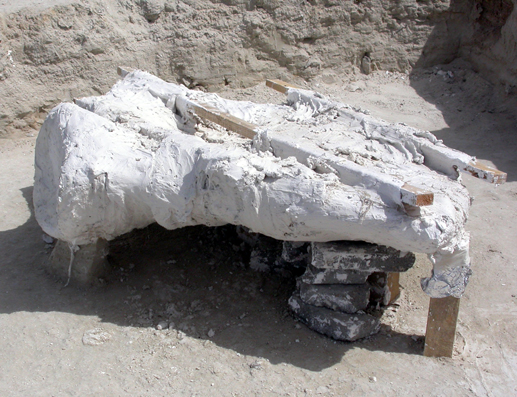 All the bones were carefully cleaned and plotted on the site plan by surveying-in points and drawing in the detail. The site is thought to be about 5,000 years old and the bones are brittle, occasionally cracked and have little or no mechanical strength. Due to their fragile nature the bones had to be consolidated with a reversible methacrylate co-polymer (Paraloid B72 at 10% in acetone). Once this had set, the larger consolidated bones (such as the scapula, radius and ulna in the photos above) and adhering sediment were then covered with acid-free tissue paper and aluminium foil, followed by a thick covering of coarse hessian strips saturated with plaster of Paris to build up a thick protective and supportive jacket. Additional support was given by either wooden splints or a metal frame bolted together around the specimen to which the jackets were attached with hessian and plaster so they could be lifted and taken to safety (see below). 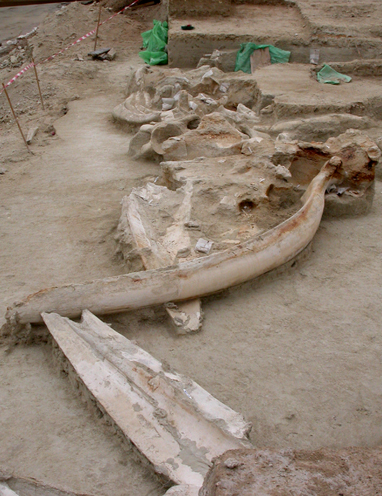 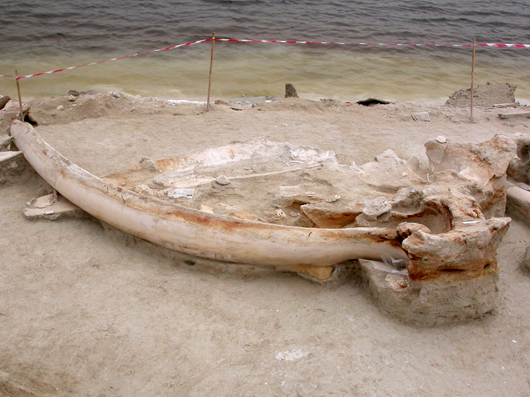 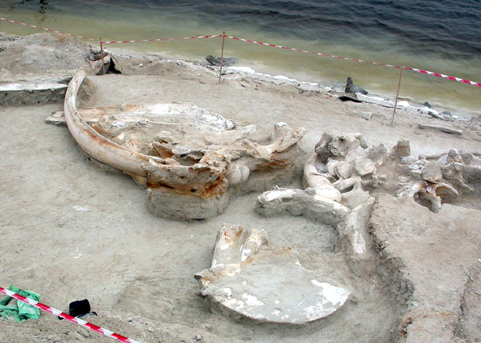 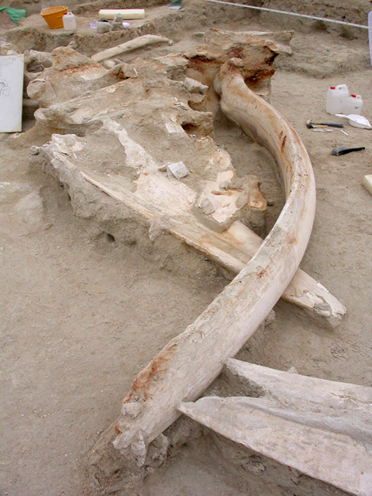 After more excavating: The skull can be seen upside-down behind and underneath the perfect curved mandible. 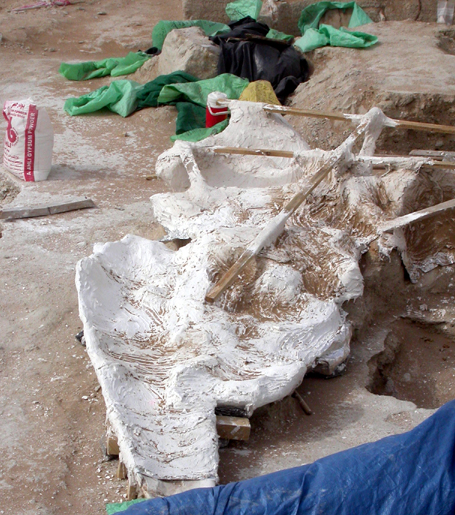 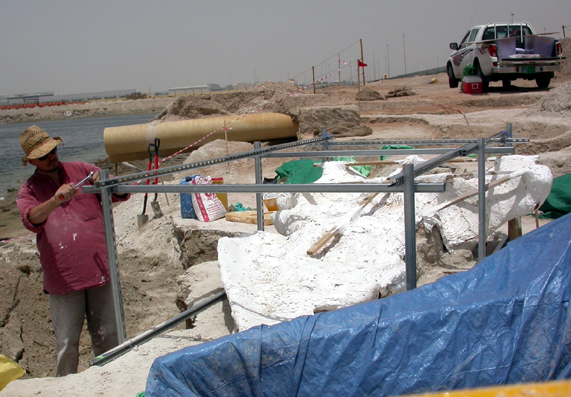 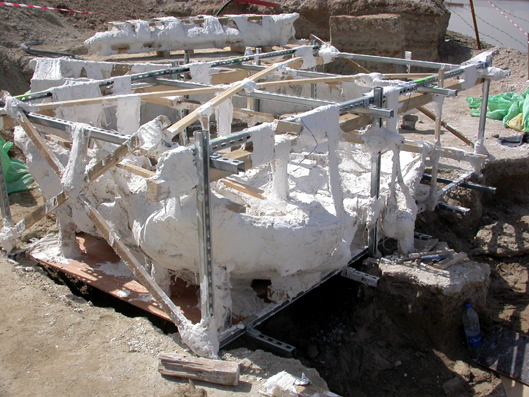 The skull (above, within the plater jacket) and the very long thin mandible were both about 4 metres long and required special attention. A rigid metal cage was constructed around these plaster field jackets and attached to them securely. These had to lift the huge fragile specimens without allowing any flexing. 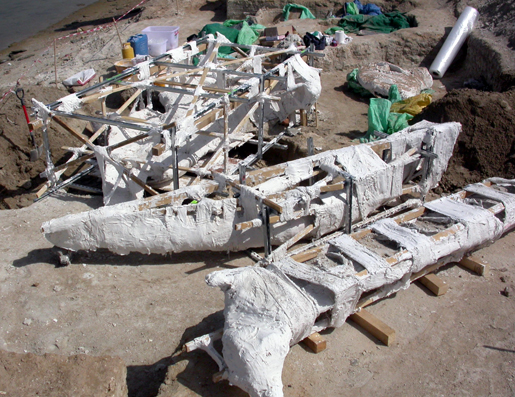 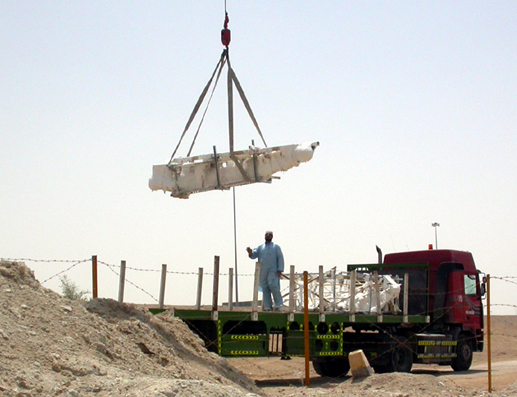 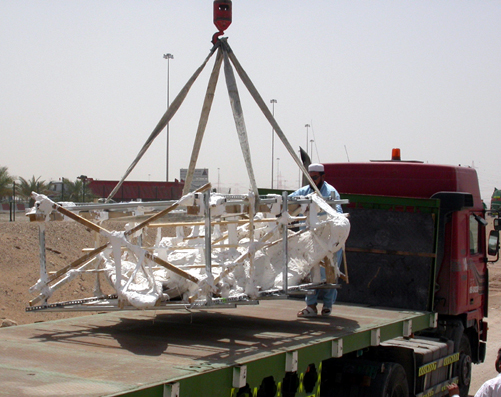 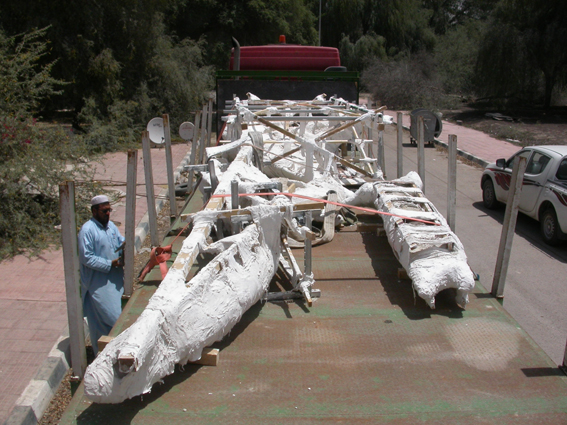 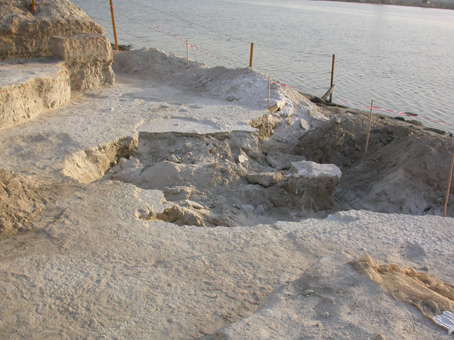 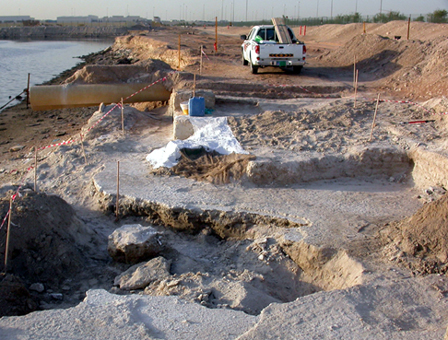 - leaving behind a very empty-looking site.