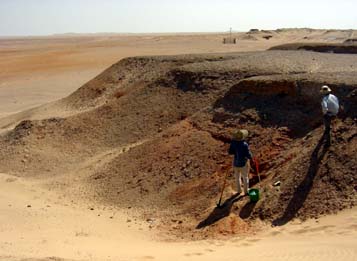 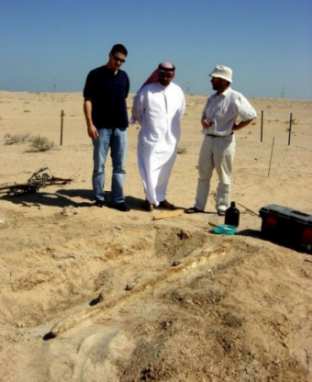 Report on the conservation and preparation work carried out on fossil Miocene specimens at Maqta, Abu Dhabi, for the Abu Dhabi Islands Archaeological Survey between the 19th and 25th October, 2003.
Photographs provided by Mark Beech, ADIAS

Three main specimens from the Ruwais site were conserved and prepared for display. All were thought to be from the Gomphothere, Stegotetrabelodon syrticus.

Firstly, a large and mostly complete pair of mandibles was worked on. This specimen had been jacketed in the field using two-part expanding polyeurathane foam. The top half of this foam was removed in small sections, with all the dust hovered up instantly as the foam was being gently cut. After the top half (only) of the foam was removed loose sand was removed from the surface of the specimen, and friable areas of the bone consolidated with Paraloid B72 (a reversible methacrylate co-polymer) in acetone at between 10 and 25% weight to volume ratio, and repaired with Paraloid B72 adhesive straight from the tube. Areas of consolidated sand obscuring the specimen were removed by applying a few drops of acetone at a time to dissolve the Paraloid B72 that had been used in the field. This softened, previously consolidated, sand was removed with a plaster modelling tool and soft brushes. 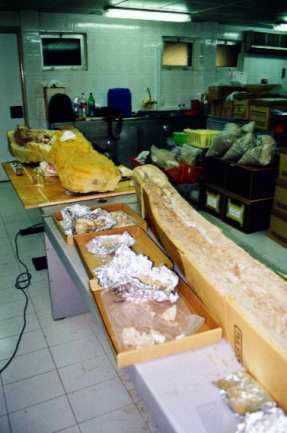 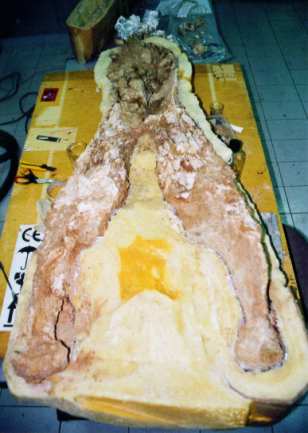 Although apparently complete (excepting the tusks) the whole specimen was covered in a hard concreted layer of sand which was found to have adhered to the poorly preserved and crumbly surface of the bone during burial. This was part of the diagenetic process and nothing to do with the application of consolidant during fieldwork. It is very possible that the specimen had suffered from weathering prior to burial and that this had damaged the surface of the bone, enabling the salt/gypsum crystals and other microscopic mineral processes to infiltrate and interdigitate with the cracked and deteriorated surface of the bone. When this concreted layer is physically removed from the bone, it takes a thin layer of the dry, fragile, friable bone with it, and it was not recommended that further removal of this layer is a priority. The overall shape of the specimen can be determined relatively easily. If any further removal of this layer is required, it is likely to be extremely time consuming and would best be achieved using an air compressor, a VP2 long-nibbed vibrotool/engraver, and possibly an airbrasive machine which would require extraction facilities and a specially-made glovebox. This specimen was left sitting in its lower half of the polyeurathane fieldjacket for support, on a long piece of wood. It must only be moved on this piece of wood, not in its field jacket alone as this will not have the strength and integrity to hold the weight of the specimen without flexing. 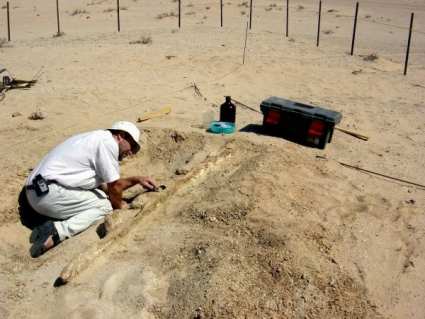 Secondly, a length of tusk was de-jacketed, conserved, and a support was made. This tusk, 1.94 metres long, had been collected in the field in the same manner as the mandible above i.e. consolidated with Paraloid B72 in Acetone and jacketed with polyeurathane foam. The upper portion of the field jacket was removed in the same manner as the jacket on the mandible above, and excessive consolidated sand was removed very carefully with very small amounts of acetone at a time. The whole tusk was a length of shattered splinters of tusk material, but with its overall morphological integrity intact. The tip in particular had a relatively good and recognisable surface area, and the midsection seemed curiously contorted but nevertheless quite well preserved. This damage must have happened very early on in the burial process, it certainly wasn't recent or the whole specimen, particularly the surface of this damaged area, would have lost its morphological integrity. The foam was removed down to only just below the half-way mark of the tusk, along its entire length. 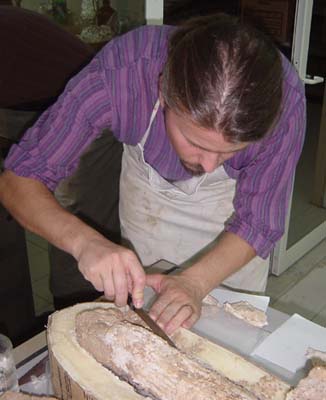 As much adhering sand was removed as was possible and practical, and the tusk fragments were well consolidated with Paraloid B72 in acetone at between 5 and 25% weight to volume. Once this had set a new, permanent, supporting jacket for this temporarily upper half of the tusk was made in the following manner :

Moistop barrier foil was cut to a shape which covered the top third of the tusk along its length, accounting for the curvature. To this was sewn an identically shaped piece of 4mm thick "Plastazote foam" (white, chemically inert, archival standard, low density, closed-cell, cross-linked polyethylene foam). The thread used was a clear, strong, polypropylene thread, regularly tied off. A couple of sheets of thin acid free tissue paper were laid over the specimen to protect it, and the layer of foam and foil was laid in position. A thick gelcoat of Jesmonite acrylic resin was applied to this, being very sure that it was so thick that it did not run off the foil and onto the specimen (though the tissue was there to protect against this eventuality). When set hard, an hour or so later, another thick gelcoat was carefully added. To this were added a further three layers of jesmonite resin, with accompanying quadraxial glass fibre matting, always being careful that no drips of resin touched the specimen.

When set, strengthening "splints" were made from lengths of wood and attached either side of the specimen with further amounts of resin and glass fibre. When set, this whole new solid jacket was taken off. Sewing with the thread had ensured that the resin on the outer side of the foil gripped the thread, and with it the foam, so that the cushioning foam didn't just fall out at this point. Once taken off, the jacket was turned the right was round, set on the flat floor and checked for wobbling. Wobbling was rectified by adding more resin and glass fibre at the appropriate point on the underside of the jacket until the wobble stopped and the jacket stood firm. The jacket was then carefully placed back on the specimen after removing the tissue paper. The new jacket was strapped to the remainder of the polyeurathane field jacket securely but not overtightly along its length. The whole combined sandwich of two jackets and tusk was then slowly and carefully rotated by two people so that the new jacket was now underneath, the field jacket was on top, and the tusk was once more the way up it was found in the field. It was now comfortably sitting in its new, permanent supportive storage structure.
The remainder of the field jacket was removed gently, the excess sand was removed slowly and carefully with a few drops of acetone at a time, and the tusk material was consolidated. Two people are needed to move the specimen, one at either end, and both should use two hands and should try to take the weight along the length of the specimen.


The third main specimen was large fragile fragment of mandible, about 70cm long, also in a polyeurathane field jacket. This had its upper portion of field jacket removed and a new permanent support made in exactly the same manner as above, only there was no need for wooden splints. Once turned over, this too was in its original orientation as found in the field.

In addition to the conservation of the three important specimens discussed above, a few smaller specimens were consolidated and glued together. This rejoining was undertaken to keep pieces from being left unassociated, to ease identification, and to prevent further deterioration of the specimens during handling and transport. The only products used were Paraloid B72 adhesive from the tube, Paraloid B72 in acetone as a consolidant (between 5-25%) and occasionally this consolidant was thickened with inert glass beads to make a gap-filling paste to increase the strength and handleability of a specimen.

If you would like to know more about this project please visit the Abu Dhabi Islands Archaeological Survey website. If you are interested in learning more about Abu Dhabi's Environmental Research and Wildlife Development Agency please visit their website.